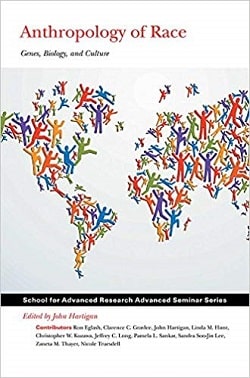 For a 2018 Intro-to-Anthropology class on “Human Variation,” we read a chapter on “What about Human Variation?” in the textbook Anthropology: What Does it Mean to be Human? Also read “How race becomes biology: embodiment of social inequality” by Clarence Gravlee (2009).

For a 2021 update using the 5th edition of Anthropology: What does it mean to be human? see Human variation is more complicated than biological race and the YouTube lecture:

These readings were for Intro to Anthropology 2018. The previous class had been on Homo sapiens and the next class began the section on archaeology.

As we discussed in our very first class, Anthropology was born during European colonialism. At the time, Europeans were asking some fundamental questions like: How do we explain difference? Are other people equally human?

For the most part, the separation of race and culture has become accepted. What many people still cannot understand is how racial classifications are also inadequate to describe biological difference.

The Modern Evolutionary Synthesis or “neo-Darwinism” combined Darwinian mechanisms with Mendelian heredity. “In anthropology, perhaps the most significant contribution of neo-Darwinism was the way it undermined the nineteenth-century anthropological concept of ‘biological race,’ refocusing attention on a new understanding of biological species” (Lavenda & Schultz 2018, 144).

Is there enough biological difference within the human species to classify human beings into groups?
YES, Human variation is real and important.
Do these classifications represent consistencies, patterns and concordances equivalent to traditional race ideas?
NO, biological variation is much more complex than traditional race categories (see Gravlee, 49).

Clinal: most features, like skin color change gradually (Lavenda & Schultz, 148). Other features vary independently of each other, as we know from classic Mendelian genetics and re-combinations. Although there is definitely a lot of human biological variation, classifications by different criteria produce different groupings.

Some biological differences in humans can be explained by natural selection. Natural selection explains sickle cell patterns as present in areas where malaria is prevalent (Lavenda & Schultz, 157-158). Contrary to US stereotypes that sickle cell is an “African” trait, it is also found in Greece, Saudi Arabia, and India. Sickle cell is also an example of how traits can be adaptive in one environment but very maladaptive in others.

Sexual Selection might help to explain certain traits considered “beautiful.” And there is also a lot of randomness to human variation, brought about by mutation, gene flow, genetic drift (Lavenda & Schultz, 156-57)

The modern concept of race originates in the colonial encounter. In this encounter, people from the furthest ends of the clinal variation where placed together in the Americas and assigned roles based on a racial classification.

For many years, the science of race–which goes against our perception of the world that we have been socially taught–seemed very secure. In 1964, Livingstone pronounced that “There are no races, there are only clines” (in Lavenda & Schultz, 148; see Gravlee, 50, point #1). As the evolutionary synthesis demonstrated, individually-inherited traits could differently combine (Gravlee, 50, point #2), and Darwin had shown us that there is “no such thing as a fixed species” (Lavenda & Schultz, 39).

In 1972, geneticist Richard Lewontin published “The apportionment of human diversity” (1972) which demonstrated there was more diversity within so-called races than between them (Gravlee, 50, point #3).

Since around 2003: “Is race still a social construction?”

In the early 2000s, some scientists challenged Lewontin’s findings. In an Op-Ed, “A Family Tree in Every Gene” (Leroi 2005) there was a claim that despite within-group variation, clusters could still be discerned (see Gravlee, 47).

Measurements give us a probable ancestry estimate. These estimates depend on the context of remains.

One interesting example comes from bones found in a creek in Iowa (Konigsberg et al. 2009):

In other words, bones do not tell us skin color or typical ethnic or racial markers–they provide a probable ancestry estimation which must be matched against current population and racial classification schemes. [For a much more detailed argument, see “Race Reconciled Re-Debunks Race.”]

Humans do vary biologically, with potential health effects, and even for abilities like “intelligence” (Lavenda & Schultz, 161-62). Race can be seen as a “culturally constructed label that crudely and imprecisely describes real variation” (John Relethford, “Race and global patterns of phenotypic variation” [2009, 20])
But these crude labels are socially and historically real, influencing access, opportunities, and outcomes. These labels often have greater health effects than ancestry, and with even greater effects for abilities like “intelligence”

Some people can change race by getting on a plane. Latin American and Caribbean classifications can be different. Some countries use hyperdescent or recognize mixtures as mestizo or mulatto. Or like Brazil, have many color categories for skin.

See this 2016 article 220 years of census data proves race is a social construct.

The cultural construction of race has real effects. In 2015, the average white household had 16x the wealth of an average black household. See The Racial Wealth Gap. This gap has consequences for housing, education, and healthcare.
The consequences are also biological, like infant mortality rates, life expectancy, and health.

Our social practices, ideas, and classifications have biological implications. Because of human plasticity, poverty and political marginalization–especially in early childhood–can have profound biological effects. “Race becomes biology through the embodiment of social inequality” (Clarence Gravlee in Lavenda & Schultz, 151). [I’ve tried to provide a longer summary of this great Gravlee article as Race Becomes Biology, Inequality Embodied.]

The previous class was on Homo sapiens and the next class began the section on archaeology.

For a 2021 update, see Human variation is more complicated than biological race and the YouTube lecture based on the 5th edition of Anthropology: What Does it Mean to Be Human?: