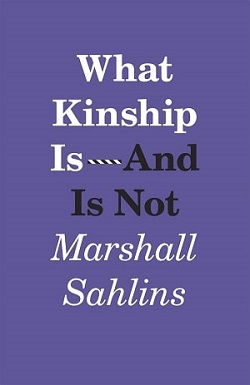 The textbook Anthropology: What does it mean to be human? has a strong chapter on kinship, “Where Do Our Relatives Come From?” For Intro to Anthropology 2018 we also read “Friends” by Helga Vierich on the International Cognition and Culture Institute blog (2018).

The material below uses the 4th edition of Lavenda and Schultz. For a 2021 update, see Kinship Circulation and this YouTube lecture:

Before discussing kinship, I wanted to revisit some themes from previous classes. First, and partly in response to Kellen’s comment, an update on Ongka. I previously found this online but apparently the link is no longer available, so here is the information:

Charlie Nairn returned in 1993, made A Death to Pay For about a new generation of Kawelka struggles, again collaborating with Andrew Strathern:
Ongka, practical to the end, is baptized in the Christian faith. “Look,” he says, “I’m going to die and I won’t come back. If I keep to my bad ways, like stealing and having loose sex, I won’t go to Heaven. So I’ll leave all these things behind me . . . my soul will go to a good place [and] God, the one they speak about, will put me on his right-hand side.” When the millennium comes, Ongka hopes he is issued a loudspeaker so he can tell his people what to do.

Also, when Ongka was on YouTube, an interesting comment popped up: “My Name is Andrew and I’m from Western Highlands Province in Papua New Guinea.. I am one of Mr Ongka’s great, great grand son… Can’t believe that he’s on you tube :o” (February 2013).

One thing these comments help us understand is that although the economic situation may change, people’s worlds can be paradoxically transformed.

A second update refers to our class on sex, gender, and sexuality. In late 2018, a proposal was floated in the United States to “narrowly define gender as a biological, immutable condition determined by genitalia at birth.” The American Anthropological Association responded that this proposal “defies a century of anthropological evidence from cultures throughout history and around the globe.”

We discussed some evidence for why anthropologists respond in this way. At the level of biology, there are various intersex conditions, leading some biologists to propose evidence for a number of possible sexes or a sex continuum. But there are also lots of historical variations around gender roles and ideas. Finally, there have always been people who consider themselves transgender, or with gender identities that do not match what they have been assigned.

If we look around the world there are many examples of societies which include third or fourth genders. Our own binary division of (until recently) only male/female is not the experience for many people who might think of themselves as “Two Spirits.”

How does kinship work?

Lavenda and Schultz begin with a conventional definition of a kinship system: “relatedness believed to be based on ideas of shared substance” (422). However, this apparently conventional and simple definition gets really strange, really fast. That is to say, as soon as we peer into what ideas people have about relatedness, shared substances, and how people have systematized those relationships, an incredible cross-cultural and historical diversity emerges.

Why did anthropologists study kinship?

Early anthropologists assumed kinship was of paramount importance. There were several reasons for this assumption. First, as Lavenda and Schultz put it, “kinship studies in anthropology were based on the assumption that all societies recognize the same basic biological relationships between mothers and fathers, children and parents, and sisters and brothers” (422). Second, anthropologists portrayed kinship as a crucial organizing factor for societies which seemed to be state-less or lack formal government. Finally, collecting kinship terms and attempting to systematize them seemed to be a way to quickly categorize and develop a typology of various societies. The concentration of anthropology on kinship became so extreme that “in the early 1950s, in the heyday of British structural-functionalism, kinship studies were in fact so dominant that outsiders spoke ironically of [anthropology] as kinshipology” (Eriksen 2017, 99).

Anthropological studies of kinship eventually realized that there were many different ways to reckon kin. We discussed bilateral kindred (Lavenda & Schultz, 428) which is more typical in the United States. We also discussed patrilineal (431-32) and matrilineal (432-33) systems, which are both variations of unilineal systems. Within unilineal systems, there may be a distinction made between parallel cousins and cross cousins (433).

Although such studies have been interesting and important, anthropologists have also realized that kinship may not always be determining for social organization. As Lavenda and Schultz put it, “anthropologists have become quite skeptical of the value of these idealized models, in large measure because they are highly formalized and do not capture the full range of people’s actual practices” (433).

Lavenda and Schultz then discuss a number of ways in which we make kin:

The larger point is this: kinship is actively made. Even “blood” needs to be reinforced by actions and is not automatically given.

One factor in the re-analysis of the importance of kinship has been the realization that those hunter-gatherer “bands” which were always depicted as completely kin-based were actually a mix of friends and kin. As anthropologist Helga Vierich describes in the January 2018 blog-post Friends: “Among the Kua adults, belonging to a wider circle of valued companions, consisting of both relatives and friends, is of paramount importance.” Vierich’s observations correspond to the textbook section on “what is friendship?” in Lavenda and Schultz (423-26).