Home » Blog Posts » Moral Optimism » What should you do? 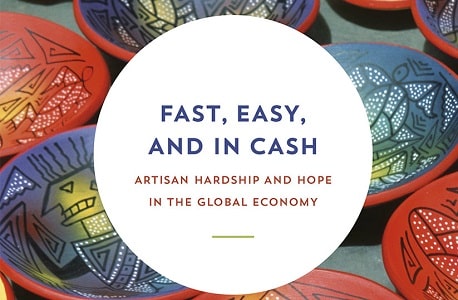 (if the United States collapses, that is)

People in many other parts of the world have already long had to deal with the kind of swings described in the post on When will the US stock market collapse? In our book Fast, Easy, and In Cash: Artisan Hardship and Hope in the Global Economy, Rudi Colloredo-Mansfeld and I describe the booms-and-busts of artisan economies. We argue that in some ways artisan economies have grown because of a winner-take-all reward system. Additionally, we see artisan enterprise in the Andes as intertwined with a long history of small-scale agriculture and rural markets, where there are often dramatic price fluctuations in the livestock markets and produce stands.

So if the United States collapses, artisan economies and peasant agriculture might be a good place to look for lessons.

Of course, if the United States collapses in more rapid form than anticipated, you need a short term plan. It is always a good idea to review your emergency preparedness kit, which is probably also going to be useful for the kinds of climate-change intensified storms we are seeing. However, I don’t want to go too-overboard with those and turn into a Prepper. It seems smart to have some basic stuff. But for all the money that goes to spendy emergency kits, it would be nice if money could also be donated to those currently experiencing emergencies.

I have always advised trying to keep your passport current.

For investment assets, I have been shifting from a focus on sustainable investing to “survival investing.” Sustainable investing seemed to work during the Obama years of neoliberal technocracy. The shift began in November 2016, but really intensified in January 2018 when the Republican tax-cut scam, the first and only major legislation the Republicans were able to pass, went into effect (see the second post on the stock market and the previous post on What if people stop funding the U.S.?).

In the face of combined assaults on education, access to healthcare, wages, and conditions of work, working people in the United States have a unique opportunity to build a mass movement unified around demands including a livable minimum wage, universal healthcare, and student debt cancellation. American students have a historic opportunity to learn from their fellow students in Europe (e.g., the United Kingdom), Africa (e.g., South Africa), and Latin America (e.g., Chile), and take the mantle of leadership in the struggle for social and economic justice in the United States.

If the United States collapses primarily in economic terms, than whenever possible we should push for Public Ownership. These were the kind of changes that perhaps could have been enacted in the 2008 crisis. They were not, and Obama’s neoliberal technocratic team eventually kept things humming along. I was always someone who felt we should have attempted greater public ownership at that time. Although I will also admit that I did not believe Obama’s neoliberal technocracy would revive the US stock market and employment numbers.

If the United States collapses as a political democracy, former Secretary of State Madeline Albright advises:

What is to be done? First, defend the truth. A free press, for example, is not the enemy of the American people; it is the protector of the American people. Second, we must reinforce the principle that no one, not even the president, is above the law. Third, we should each do our part to energize the democratic process by registering new voters, listening respectfully to those with whom we disagree, knocking on doors for favored candidates, and ignoring the cynical counsel: “There’s nothing to be done.”

At the end of Fast, Easy, and In Cash, Colloredo-Mansfeld and I tried our hand at some policy prescriptions for encouraging a local, public economy:

Throughout this book, we have challenged the artisan-invoking economic prescriptions that crop up on op-ed pages in the United States. Such descriptions of artisans did not ring true to us. Having now laid out the artisan industries, the innovations, the setbacks, the common value, and the public life of an artisan economy, we will honor these other writers with an effort to offer our own prescriptions. Among the lessons that may be taken from artisan economies in the northern Andes are the following:

This last point is more of a starting point than a final observation. Closely examining these Andean marketplaces provides timely lessons in the workings of careers in contemporary capitalism, including the necessity of skilled work, innovation, and finding an edge. But when those careers get traction, the crucial tasks lie just beyond the boundary of an enterprise. Rather quickly, a group of competitors will launch a new commons of ideas, culture, and value. The terms in which they recognize their shared ground and the ways they come to care for it are among the most interesting and important lessons to be learned from contemporary artisans. (2015, 194-95)

Admittedly, the prescriptions at the end of Fast, Easy, and In Cash are too brief, perhaps more in the way of teaser prescriptions rather than policy suggestions. As Corinna Howland correctly noted in her review for the Journal of Cultural Economy, we are perhaps side-stepping some of the bigger questions:

Antrosio and Colloredo-Mansfeld are, with significantly more ethnographic experience and understanding in their arsenal, responding to scholars and popular writers who have explicitly proposed that the qualities of artisan endeavor be adopted as a salve for the (many) maladies of post-industrial capitalism. As a parting gesture, they do seek to ‘honor these other writers’ (p. 193) with some thoughtful prescriptions of their own. Yet this deftly sidesteps the larger question of whether artisan values could ever–even provisionally and contingently–save the market from itself. In classic anthropological fashion, they have instead illustrated and unsettled these authors’ unreflexive assumptions and revealed the complexities of what actually happens on the ground (as a counter to such reductive analyses).

I think my main model for putting prescriptions at the end came from reading Michel-Rolph Trouillot’s masterful but ridiculously under-read ethnography Peasants and Capital: Dominica in the World Economy (1988). At the end, Trouillot outlined his prescription for delinking and self-centered development:

The notion of self-centered development always entails some distancing, some form of “delinking” (Amin et al. 1982), some degree of “deconnection” (Amin 1986) from the sphere of exchange dominated by capitalist accumulation. This view does not mean complete autarky or total withdrawal from the sphere of exchange, but it does imply that trade relations with the outside become subordinated to internal necessities rater than the other way around (Amin 1986:115). In the case of nations in which the majority of the population depend on the peasant labor process, the delinking should be dual. First and foremost, relations and contacts with foreign industrialized nations should be governed by the logic of internal growth rather than outside needs. Second, the logic of the relationships between peasants and the rest of the nation should weigh more in favor of the countryside than in favor of the minority of urban nonproducers. . . .

This suggestion may seem idealistic, but I believe that a program of self-centered development is within the reach of most peasant nations. Furthermore, I believe that it is their only option everything else having failed miserably. I do not mean that this program will produce miracles. I see it rather as a path, a gradual process of uneven dimensions. . . . Hence it is crucial that the first few steps of any delinking strategy be based on a correct assessment of local strengths, including the social and cultural strengths of the peasantry. This assessment is necessary, first, to sell the delinking package to the nation as a whole and, second, to implement it gradually.

I once asked Trouillot in class about what had happened with these recommendations. He shot me a look. I can’t tell what kind of a look it was, but something along the lines of, “Well, what do you think happened?” Which I think went along with his penchant for being suspicious of social science predictions, and that we should be especially careful not to wager the value of anthropology on its predictive ability.

And while I generally agree with Trouillot’s perspective, I do think spending some time on this series about When will the United States Collapse? was a useful undertaking for April 2018.

To cite: Antrosio, Jason. 2018. “What should you do? (If the United States collapses, that is).” Living Anthropologically website, https://www.livinganthropologically.com/if-the-united-states-collapses/. First posted 18 April 2018. Revised 19 September 2019.