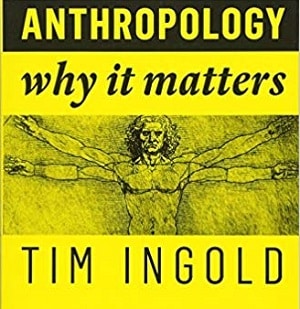 finding our way around the ruins

I would like to begin with some observations continuing from the previous class and the textbook chapter in Muckle and González, “Anthropology and Sustainability.” In that class, I noted that our current trajectory does not seem sustainable. Rather than bring wealth to all, industrial exploitation has resulted in the ruins of mines, plantations, and industry (Muckle and González, 332-333). Similarly to Muckle and González discussing human impacts on water and the biosphere, Ingold notes that industrial production and fossil fuels are

affecting the world’s climate, increasing the probability of potentially catastrophic events, and in many regions shortages of water and other necessities of life have sparked genocidal conflicts. The world remains in the grip of a system of production, distribution and consumption that, while grotesquely enriching a few, has not only left countless millions of people surplus to requirements, condemned to chronic insecurity, poverty and disease, but also wreaked environmental destruction on an unprecedented scale, rendering many regions uninhabitable and clogging lands and oceans with indestructible and hazardous waste. (Ingold, 5)

In short, we are in a world in which we must “find our way around the ruins” (6):

This world-on-a-knife-edge is the only world we have. However much we might dream of life on other planets, there is none other to which we might escape. Nor is there any going back to the past, from which to try an alternative route to the present. We are where we are, and can only carry on from there. As Karl Marx observed long ago, human beings are the authors of their own history, but under conditions not of their own choosing. We cannot opt to be born into another time. Our present conditions were shaped by the actions of past generations that cannot be undone, just as our own actions, in turn, will irrevocably shape the conditions of the future. (Ingold, 5-6)

Ingold here invokes one of Karl Marx’s most famous observations. Marx was reflecting on the defeat of a popular revolution and a subsequent military coup in France. Marx noted that people “make their own history, but they do not make it just as they please in circumstances they choose for themselves; rather they make it in present circumstances, given and inherited. Tradition from all the dead generations weighs like a nightmare on the brain of the living.”

That is where we find ourselves, and for Ingold “that’s where anthropology comes in, and why–in our precarious world–it matters so much” (6). For Ingold, anthropology is fundamentally about “How should we live?” (1). Or, put differently, “we call ourselves human beings, but what does it mean to be human?” (3).

Ingold begins from the standpoint that the meaning of being human is always social, from the beginning, and always multiple:

As paths are made by walking, so we have continually to improvise ways of life as we go along, breaking trails even as we follow the footsteps of predecessors. We do so, however, not in isolation but in the company of others. . . . That’s why human life is social: it is the never-ending and collective process of figuring out how to live. Every way of life, then, represents a communal experiment in living. (Ingold 1-2)

In the Muckle and González chapter on “Sustainability,” we discussed how anthropologists could be helpful by documenting what is called “Traditional Ecological Knowledge.” In fact, for the most part anthropologists emphasize our contribution as part of the social sciences and as producing knowledge.

Although Ingold does not want to deny the importance of anthropology in knowledge production, his main goal is to tell us what anthropology should “aspire to be” (3). Here, he does question whether the purpose of anthropology should be to be just one more member in a knowledge-production team. Ingold questions to what extent we seem to be over-producing knowledge, in a similar way to how we over-produce consumer items. “According to a recent study, some 2.5 million scientific papers are published every year, and the number published since 1665 has passed the 50 million mark” (7).

For Ingold, “my kind of anthropology, indeed, is not in the business of ‘knowledge production’ at all” (8). Instead, anthropologists do fieldwork with others in order to “share in their presence, to learn from their experiments in living, and to bring this experience to bear on our own imaginings of what human life could be like, its future conditions and possibilities” (Ingold, 8).

Ingold believes that what anthropology should be seeking is not so much knowledge but wisdom. He proceeds to distinguish between knowledge and wisdom (interestingly, these were the passages most cited by students and so is a good question for the final exam):

Knowledge seeks to fix things within the concepts and categories of thought, to hold them to account, and to make them to some degree predictable. We often speak of arming ourselves with knowledge, or of using it to shore up our defences so that we can better cope with adversity. It gives us power, control, and immunity to attack. But the more we take refuge in the citadels of knowledge, the less attention we pay to what is going on around us. . . . Knowledge fixes and puts our minds at rest; wisdom unfixes and unsettles. Knowledge arms and controls; wisdom disarms and surrenders. Knowledge has its challenges, wisdom has its ways, but where the challenges of knowledge close in on their solutions, the ways of wisdom open up to a process of life. Now I am not of course suggesting that we can do without knowledge. But we need wisdom as well. (Ingold, 9)

And then, in a crucial observation: “At no previous time in history, indeed, has so much knowledge been married to so little wisdom. It is the task of anthropology, I believe to restore the balance, to temper the knowledge bequeathed by science with the wisdom of experience and imagination” (Ingold, 10; I was thinking of Ingold’s injunction when I wrote reflections on College and Coronavirus).

Where do we get wisdom?

Of course, this leads to the question of where anthropology, as an academic discipline, might gain this wisdom. Anthropology, as Ingold has described it, is “philosophy with the people in” (4). And the people we learn from are those who “might otherwise be dismissed as uneducated, illiterate, or even ignorant. These are people whose voices, unused to dominant media of communication, would otherwise remain unheard” (10). So for Ingold, anthropological fieldwork through participant-observation is not some kind of data gathering technique. “We study with people, rather than making studies of them. . . . It is a practice founded on generosity” (11).

From here, Ingold plunges into the title of this chapter, “taking others seriously” which “is the first rule of my kind of anthropology” (15). Taking others seriously means not just listening to what they say, but to “face up to the challenges they present to our assumptions about the way things are” (15). We do not have to agree, but we should at least take this challenge seriously.

Interestingly, one of the ways in which we sometimes do not take others seriously is when we say things like “that’s just their culture” (we discussed this in our class section on Culture Caveats. When we simply pass off other beliefs or practices as “just their culture” or only of “cultural interest” it results in the same arrogance that we are trying to avoid:

Human worlds, we insist, are culturally constructed – except, of course, our own, since, bathed in the light of reason, we can see what they cannot, namely that these diverse constructions are but alternative fabrications of a given reality. . . . We can see in, they can’t see out. This stratagem is reproduced every time we treat the things people do and say not as lessons from which we can learn but as evidence from which to build a case. It amounts to treating these things as symptoms of something else, of the hidden hand of culture that, unbeknownst to the people themselves, is driving their thought and practice. This, indeed, is to betray the first rule of anthropology. For to take others seriously means not to close the case but to open up to imaginings enriched by their experience. (Ingold, 16-17)

Ingold introduces “the inscrutable vocabulary of philosophy” in order to explain that the questions at stake go beyond simply knowing about the world (epistemology) and become more about being in the world (ontology). His example is of an anthropologist A. Irving Hallowell and his friendship with William Berens, Chief of the Berens River Anishinaabe or Ojibwa people (17).

In Western thought, life is a property of things. Things can be animate or inanimate. When linguists encountered the Ojibwa language, as well as other languages, they similarly classified nouns in other languages as animate or inanimate. Interestingly, the linguists classified “stones” in the Ojibwa language as animate. But this led Hallowell to ask: “‘Are all the stones we see about us here alive?’ After long reflection, Berens answered thus: ‘No! but some are'” (Ingold, 19).

Now, if we see this statement as not simply as another example of cultural variation (epistemology) but as a possible explanation for how the world actually is (ontology), it provides other possibilities for being alive:

This means thinking of life in a way very different from that imagined by science. It is not some secret ingredient, hidden within things deemed to be in possession of it, whence they are mobilized on the world’s stage. It is to think of life, rather, as the potential of the circulations of materials and currents of energy that course through the world to bring forms into being and hold them in place for their allotted span. It is not, then, that life is in stones. Rather, stones are in life. (Ingold, 23)

Ingold’s lessons from Hallowell are developed in an earlier book that I use in my Cultural Ecology course. But here, Ingold underscores the urgency of these questions and why they matter to us now:

The shift to questions of being that began with Hallowell has since gathered such momentum that many anthropologists today are speaking of a ‘turn to ontology’. For Hallowell himself–despite his prescience a man of his time–this was a turn too far. In the end, and tragically, he turned his back on his friend. The title of his paper–‘Ojibwa ontology, behavior, and worldview’–says it all. In it, Chief Berens reappears as an anonymous ‘old man’ whose attitude towards stones merely attests to the received view of his culture. We can no longer afford to be so complacent today. For it has become evident, as never before, that the existential certainties upon which the modern era was founded have taken the world to the brink. We need to forge alternative approaches to the problem of how to live, which might heal the rupture between ways of knowing the world and ways of being in it, between science and nature. This healing is a necessary step along a path towards a future that is open-ended and sustainable. (Ingold, 24)

That seems to be an ideal quote for our time. From there, we move on to the next chapter on “Similarity and Difference.”