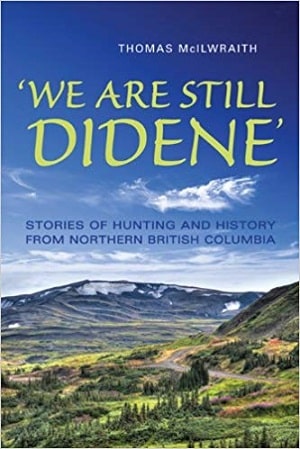 For Introduction to Anthropology 2020 we read:

In line with their textbook themes of food and sustainability, Muckle and González concentrate this chapter on food-getting strategies. At the same time, they are also trying to introduce the work of economic anthropology, which has been a big part of the development of how anthropology emerged. “Food-getting strategies also provide a foundation for the economics of a society, or how goods and services are produced, distributed, and consumed” (Muckle and González, 226). We’ll begin with the Richard Lee article on “Eating Christmas in the Kalahari” and then go back into the Muckle and González chapter.

Eating Christmas in the Kalahari

Like the article “Shakespeare in the Bush” which we read for our previous class on language, Richard Lee’s article appears in Natural History and is from roughly the same time period. Richard Lee is relatively famous within anthropology for helping to reorient our approach to gathering and hunting or “forager foodways” (Muckle and González, 228). Lee is less famous outside of anthropology, but if you remember reading the article by Jared Diamond, “Worst Mistake in the History of the Human Race,” the quote about eating mongongo notes and many of Diamond’s observations are directly drawn from Richard Lee’s fieldwork (Diamond left that part out of his article).

The “Eating Christmas” story is less about food-getting and more about what Lee learns regarding a “reciprocity network” (Muckle and González, 230). The story begins by Lee observing how it was impossible for him to share food. Although food sharing is often a key part of what we learned about fieldwork and participant observation, in this case Lee’s food-sharing would have disrupted the very aspects of life he was trying to study.

Lee decides to try to make it up by buying and donating the biggest Christmas Ox he could find. But in the process he learns a lot about what anthropologists call “generalized reciprocity” (Muckle and González, 233) and how it is enforced in a relatively egalitarian society. For Lee, this leads him to conclude that “as I read it, their message was this: There are no totally generous acts. All ‘acts’ have an element of calculation. . . . After all, to kill an animal and share the meat with people is really no more than Bushmen do for each other every day and with far less fanfare.” (See this student comment on how we expect to be praised for our actions.)

After a number of student comments about Lee’s “Eating Christmas” article (see this comment for example) it struck me that the coronavirus crisis is a time when we can see the need for generalized reciprocity. Muckle and González write that in generalized reciprocity “the value of a gift is not specified at the time of exchange, nor is the time of repayment. However, the parties involved have the responsibility to reciprocate at some time and in an equal way” (233). Muckle and González are drawing on a classic book by Marshall Sahlins, Stone Age Economics, which also elaborated on Richard Lee’s fieldwork.

Muckle and González write that “familiar examples in modern society might include throwing a party for close friends, with the expectation they will invite you in return when they host a party, or caring for a sick parent, who has done the same for you many times” (233). Of course, what makes generalized reciprocity difficult in April 2020 is that it can be deadly to host a party. While many students are now asked to care for sick parents or grandparents, this must be done with utmost care because of virus transmission. But still, we need lots of generalized reciprocity right now, as well as paying and supporting the people who are working so hard in healthcare and essential services.

The Muckle and González chapter has a lot of information and useful knowledge about food-getting and economics. I would like to make four main points about what we know from economic anthropology:

We’ll go through each of those points, using examples from the Muckle and González textbook, although this may re-order some of how they present the topics in their chapter.

Muckle and González proceed through various types of food-getting. As we go through the typology, we should always keep in mind (as we learned in the Archaeology unit) that these societies (like cultures) are always changing. They also interact with other societies that may have different systems. And people themselves migrate between and among different societies. Or as Muckle and González put it, “food-getting strategies are flexible and nonexclusive. No society is locked into one settlement or economic pattern, and all societies have a dynamic relationship with their environment and with other societies with whom they come into contact. Several strategies may be used at one time, with one generally being dominant” (226-227).

As we learned in the class about Race and Culture, before any anthropologists arrived the world had already been transformed by colonialism and interconnection. So although it is interesting to read about anthropological fieldwork, we might also wonder about how the Ju/’hoansi learned to appreciate corn–or how so many people in Africa began growing corn. And although Richard Lee does not share food, he does share tobacco–where had they learned to use tobacco?

It is not until fairly late in the chapter that Muckle and González discuss how plantations and slave-labor introduced industrial-style long-distance agricultural production for sugar as well as coffee and tea (248). For me, this is a hugely important point. By the time anthropological fieldwork arrived to describe other forms of economic life, most of the world’s peoples had more sugar, coffee, and tea in their diets than ever before. Moreover, the plantation system in the Americas would be a template for industrialized agriculture and for the much-heralded Industrial Revolution.

In addition to sugar, there was a lot of other stuff–corn, potatoes, tomatoes, and tobacco from the Americas; horses, cows, and sheep from Eurasia–which became traded and cultivated all over the world.

There were also large-scale migrations and more subtle population shifts. So even if some societies were not directly in contact with European colonists, almost all societies were at least indirectly influenced. And much of these influences were forgotten or neglected by the time anthropological fieldworkers arrived. So for example if we turn back to Richard Lee’s work in the 1960s, Lee portrays a society that is able to more than meet its needs through gathering and hunting. But what goes un-discussed is the German-led colonial genocide in this region from 1912-1915 (Robert J. Gordon, Hiding in Full View, 2009). If Gordon is correct about the genocide in 1912-1915, then it would have had obvious demographic effects at the time of Lee’s work. 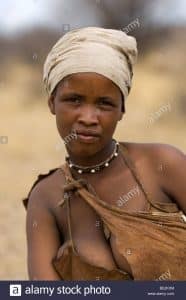 I sometimes ask students to check out the photo in the textbook. To my eye, it looks like the younger “forager” is doing some hunter-gatherer chic: eyes on the camera with bared midriff. Or check out this photo, which seems to be the same person as in the textbook–and looks to me like a modeling shot. (Yes, students do think I might be crazy, but I’m trying to say that the notion of cameras, fashion, and money-making fame is everywhere.)

Although I emphasize the changes of colonialism and the fact that market capitalism has been imposed around the world, it is also important to recognize how people have been resilient and have reinvented their traditions under these circumstances. A century ago, when anthropologists were first doing fieldwork, everyone assumed that indigenous societies were disappearing.

People still consider themselves to be hunters and to talk about hunting. This can be illustrated by Thomas McIlwraith’s book ‘We Are Still Didene’: Stories of Hunting and History from Northern British Columbia (in Muckle and González, 232).

Or, there is the potlatch (Muckle and González, 236), an economic and social event important in the northwest of North America. Potlatches were made illegal, and many though they would go away. But: “Potlatches continue in contemporary times and today are much more common than in precolonial times” (236).

Or, check out “spread,” an example of how people can make food creatively, even from within a prison (in Muckle and González, 242-243).

These ideas of resilience and reinvention are a great introduction to our next class, when we’ll be watching the classic anthropological film Ongka’s Big Moka.