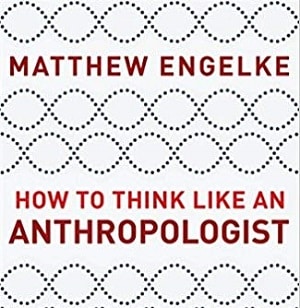 The first class of “Intro to Anthropology 2020” began with the first part of “Viewing the World” in the Muckle and González textbook Through the Lens of Anthropology. For a 2021 update, see “what it means to be human” using the textbook Anthropology: What does it mean to be human?

Many students sign up for an anthropology course in order to meet a requirement, or maybe just because it looks interesting. Anthropology is perhaps the least well-known academic discipline. So what is anthropology?

As we delve deeper into anthropology, it turns out that the anthropological perspective can be quite unsettling. In the words of Tim Ingold, who we read to conclude the course: “Anthropology doesn’t tell you what you want to know; it unsettles the foundations of what you knew already” (107). We can see how that unsettling works when we turn to the subject of anthropology. Anthropology may be the study of humans, but who are humans?

As Muckle and González describe, “human has a distinct meaning in anthropology and may be used in ways that are unfamiliar” (5). Wait, what? It’s already unsettling. Basically for some anthropologists humans might include

With regard to the final point about rejecting the idea that only a particular group of people in today’s world should be considered human, anthropologists insist that culture is the primary explanation for human differences. That is to say, just because other people are doing things differently, it does not make them not human, it makes them differently human, as part of our learned behavior as human beings. Muckle and González use a very matter-of-fact definition of culture: Things people think, things people do, things people have (6). Those things are learned. And it is important to state from the beginning that culture is “dynamic, fluid, and ever-changing” (Muckle and González, 7).

There have been lots of anthropological debates about the idea of culture–see Culture, Culture, Everywhere for example. And as a parallel to the debates about what time period we should start using the term human, anthropologists have debated around what epoch culture begins.

In short, when does culture happen? Does it happen

Like with the term “human,” anthropologists might disagree on when to begin calling behavior “cultural.” That said, there are some arrogant definitions of culture that anthropologists definitely reject:

Muckle and González describe anthropology in North America as emerging from a “four fields” approach:

For Muckle and González, any field of anthropology has a potentially applied or practical application. In this textbook, they use two themes to apply anthropology and cross-cut all the material we will be studying. Those themes are Food and Sustainability. The textbook does feature a specific chapter on Food-Getting and on Sustainability, but these themes pop up throughout the textbook.

One of the founding issues of anthropology was to compare human similarities or universals with human differences and particularities. In some ways, human universals and similarities–what we seem most to share–are also what make us most different and particular (Muckle and González, 2).

One commonality among many human societies is to be “ethnocentric,” or to consider our own ways of doing things to be the only natural, human way to do things. To counter this common ethnocentrism, anthropologists proposed “cultural relativism” which Muckle and González briefly introduce here. This basically means to consider what people are doing in its own context before passing judgement on those ideas or behaviors. Cultural relativism is not equivalent to philosophical relativism or moral relativism–it is a means for understanding, not of automatic acceptance. Nevertheless, it should prompt us toward a perspective of tolerance.

And so the next class takes a classic critical self-awareness test by reading about The Nacirema, and finishing the first textbook chapter of Through the Lens of Anthropology.