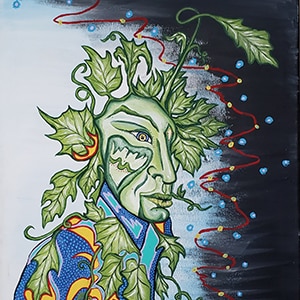 Using the textbook Through the Lens of Anthropology (note: link is to the 3rd edition, but page numbers and quotes for this class are to the 2nd edition) for Introduction to Anthropology 2020 we read “Anthropology and Sustainability.” This was a particularly inspiring chapter for students and for the authors:

Your students’ comments are wonderful to read, especially to see what stood out to them in the chapter! @JasonAntrosio @bobmuckle @utpress https://t.co/k14nVzySU5

I began by returning to something we discussed about cultural anthropological fieldwork. When anthropologists started doing fieldwork, a little more than a century ago, in contrast to prevalent racial ideas that others were inherently inferior or primitive, anthropologists posited that other people were experts, intelligent, and had interesting patterns exhibited in

Anthropologists insisted that people learned these patterns, and that we could learn them as well, through the process of doing fieldwork. Anthropologists also insisted that learning about others might be valuable, in contrast to typical Western ideas that others were just stupid, primitive, or at best inefficient. Many economists touted the idea of markets and capitalism as the most efficient system. Many economists also believed that without private property regulations, others would engage in an unsustainable overuse of their resources. Muckle and González discuss the idea of Garrett Hardin that there would be a “tragedy of the commons” (338) without private property.

Anthropologists documented the skills and knowledge of others. They also documented that in contrast to the idea of an individualistic overuse, or tragedy of the commons, that people had social and cultural agreements about resource use (Muckle and González, 332, 340). So in contrast to ideas that others were necessarily inefficient–or just dumb–anthropology documented the efficiency and utility of other ways of adapting.

A Century of Anthropology

For this class, I had hoped to be able to take students to the Yager Museum Exhibition of Indigenous Art. This exhibition featured work by Cathie Jamieson and Luke Swinson.

One of the reasons I wanted students to see contemporary indigenous art is simply to demonstrate that although a lot has disappeared, there has also been lots of revival and recuperation. We have found that in many cases the regime of extraction-for-profit turns out to be an inefficient or stupid use of our natural resources. Rather than bring wealth to all, industrial exploitation has resulted in the ruins of mines, plantations, and industry (Muckle and González, 332-333).

Although this exploitation and ruin has been sometimes less visible to people in the United States, over the past few years (and perhaps even more in the past two months), we have seen how very crisis-prone and unsustainable our own economy can be. For the past two years, I’ve written in my slides that our “current trajectory does not seem sustainable.” This statement seems painfully more true than ever.

Muckle and González are very good at emphasizing the issue of water. They previewed this with a section on “Environmental Inequality: Access to Water” back in the chapter on Political Organization (298-300). Here, Muckle and González note that contaminated water is the single greatest cause of human sickness and death (334). They also discuss Standing Rock and the Dakota Access Pipeline (339), which is another example of how indigenous peoples have not disappeared but are able to organize in order to fight for resources and social justice.

Muckle and González also have a good discussion of “Food Matters: Chocolate Production” (348), which is nicely brought out in a student comment:

Muckle and González detail a number of ways that anthropologists can contribute to understanding sustainability. One is just by doing what we might call old-fashioned ethnography or fieldwork, because we can find it useful as “Traditional Ecological Knowledge” (342). Anthropologists can be helpful when it comes to recuperating and reviving culture and language (350-351). Muckle and González discuss what is now called “ethnoecology” (344). Basically that means that the people who were previously ignored as “disappearing” have a lot to teach us about sustainability and resilience.

Another important issue is that “armed with the knowledge of human history and societies, anthropologists can bring it to the larger public, helping people understand the effects of their actions” (352). Here Muckle and González discuss the example of Margaret Mead and how she published in the popular women’s magazine Redbook. (I actually had a chance to comment on a paper analyzing Mead’s Redbook articles and their relevance for public anthropology.) Of course, the issue of public anthropology brings us back to the first chapter, when we spoke of the need for anthropology to get beyond the “fluffy bits of human behavior” and to not just be “guardians of the savage-slot” (Gusterson in Muckle and González, 23).

Muckle and González end their textbook singing the praises of anthropology professors, who are able to teach and contribute to campus sustainability efforts (352-353). I hope so! And I hope as we look toward a future in which we must plan sustainable and resilient campuses, anthropologists will “appear in these roles as leaders, alongside biologists, environmental scientists, and ecologists” (352).

Please see the Disqus comments below in which a number of students drew attention to the table of “Human Impacts on the Biosphere” (Muckle and González, 334) and noted that how the COVID-19 slowdown has also shown how we might be able to positively change our behavior. Let us hope that will be part of our learning and rebuilding.

And that led us into the first chapter of Tim Ingold’s book, Anthropology: Why It Matters.