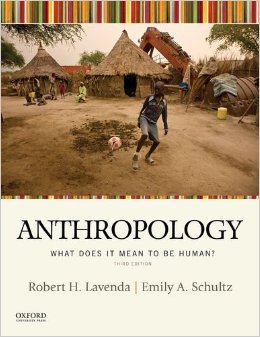 For my 2015 Introduction to Anthropology course, I got a first look at the 3rd edition of Anthropology: What Does it Mean to be Human? by Lavenda and Schultz. I adopted this textbook starting with their first edition. I commented on revisions for this 3rd edition, and this version did address some of my earlier concerns. (For follow-up course outlines using this textbook see Anthropology 2017 and Anthropology 2016. For a course outline using the 4th edition see Intro-to-Anthro 2018. And for the most current 5th edition, see the 2021 course Variability of Humankind.)

I was also excited to adopt War, Peace, and Human Nature: The Convergence of Evolutionary and Cultural Views edited by Douglas P. Fry. During the height of the Diamond-Chagnon-Pinker alliance, I originally highlighted the hardcover version of War, Peace, and Human Nature, and hoped for a reasonably-priced paperback. Oxford University Press released the paperback in February 2015. For an Introduction to Anthropology course this collection demonstrates how anthropologists and others can bring together archaeology, primatology, biological anthropology, and sociocultural perspectives around a common theme. For a scholarly production, it is remarkably readable and worked well in this introduction to anthropology course.

For an ethnography, I returned to Ruth Gomberg-Muñoz and her short but powerful Labor and Legality: An Ethnography of a Mexican Immigrant Network. I used this book in my 2013 Introduction to Anthropology, and the issues remain very relevant. See Ryan Anderson’s interview with Ruth Gomberg-Muñoz on Savage Minds, Legality, Race, and Inequality as well as the Open Anthropology issue World on the Move: Migration Stories edited by Alisse Waterston.

Unfortunately I will not use Lila Abu-Lughod’s Do Muslim Women Need Saving? Although I was excited to use this book for my 2014 Introduction to Anthropology, in many cases the students found the exact opposite message to the one Abu-Lughod was trying to convey. Abu-Lughod uses long and lurid excerpts from what she critiques as a “pornography of bondage” (2013:102). But unfortunately for some students the pornography became more powerful than the critique.

I fear that with Charlie Hebdo and other attacks in France, Abu-Lughod’s message has even less chance of being received. There is some irony here, in that Abu-Lughod had already pointed out the particular politics of the “pornography of bondage” in France:

That books about bad Arabs who force and enslave girls have a special place in the politics of European immigration is revealed by the enthusiastic reception of such books in France. Three of the classics I discuss in this book were first published or publicized there. . . . French anxieties about North African immigrants are particularly intense, as these Arab Muslims form a postcolonial underclass in the restless suburbs. (2013:97)

Updates on Introduction to Anthropology Course

This post is part of a series on teaching four fields Introduction to Anthropology as a way to understand What is Anthropology? Please see: