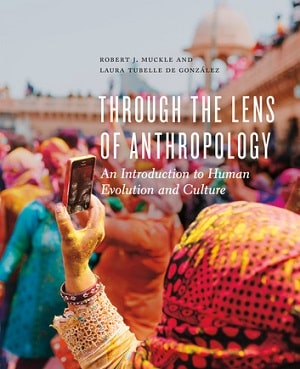 Anthropology studies human life and possibility. It is the only academic discipline that combines human biology and evolution; history and archaeology; culture and language. An Introduction to Anthropology is essential for confronting the human problems of climate change, racial justice, and health equity in a global age.

For textbooks, I am currently using the 3rd edition of Through the Lens of Anthropology: An Introduction to Human Evolution and Culture by Robert Muckle, Laura Tubelle de González, and Stacey Camp. See Intro to Anthro 2022 for this course and here is the YouTube lecture playlist.

In 2021 I used the 5th edition of Anthropology: What Does it Mean to be Human? by Robert Lavenda and Emily Schultz. See Intro to Anthro 2021 and the YouTube Playlist of recorded lectures.

For additional resources see the Purpose of Living Anthropologically.


An introduction to anthropology encompasses human biology & evolution, archaeology, culture & language.Click To Tweet
The Anthropology pages of Living Anthropologically use anthropological studies to comment on contemporary issues and ideas. The chapters cross-reference blog posts and other resources. They are best used as a complement to traditional anthropology courses and textbooks.

Explores biological anthropology, emphasizing biology and evolution as dynamic processes and anthropological documentation of human possibility. These sections are also available on Amazon as a Kindle eBook, Anthropology I: Human Nature, Race, Evolution in Biological Anthropology. (I have been unable to update the Kindle edition since 2012-2013. I am still struggling with how to keep the blog updated while also putting out the work in something more like an eBook.)

These pages on Biological Anthropology begin with an overview about the place of anthropology in the Western idea of human nature. Ideas about human nature became increasingly entwined with ideas of evolution and race. These sections attempt to retell the story of evolution from an anthropological perspective, questioning previous notions of biological race. There are also short summaries of insights from primatology, the recent discoveries of interbreeding with archaic Homo species, and the emergence of anatomically modern humans. The concluding section is a call to adopt a biocultural perspective on human nature and human evolution.

These pages explore Archaeology from the domestication of plants and animals through the rise of states and empires. Several of these sections concentrate on countering the influence of Jared Diamond, who has become a ubiquitous pseudo-archaeologist and supplanted real accounts of archaeology and history. Instead, anthropology demonstrates the complexity of hunting and gathering as well as the complex processes known as domestication. This allows us to provide an accurate account of the past, useful for truly understanding the rise of powerful societies and eventual European colonialism.

The archaeology sections begin at the point when Homo sapiens populated all the habitable continents. Although there are periods of separation, especially between Eurasia and the Americas, archaeology always reveals human connection, trade, and migration. These sections therefore include the creation of a global economy in the 15th century as well as the industrial globalization of the 19th century. These processes are crucial to understand the emergence of academic anthropology and the idea of culture. (For more on a perspective of interconnection and teaching Introduction to Anthropology, see The Discovery of Sidney Mintz: Anthropology’s Unfinished Revolution.)

An important part of understanding archaeology is also how the field is taught and presented. See the August 2019 article Building a Diverse and Inclusive Archaeology by Laura Heath-Stout for a challenge to “build a discipline that is as diverse as the past peoples that we study.”

The Cultural Anthropology category of blog-posts explores the anthropological idea of culture. Academic anthropology began within a world already shaped by the colonial encounter. Anthropologists launched the idea of culture as a way to counter the racist and determinist justifications for that social order. These posts also trace how the concept of Culture was turned into the idea of plural cultures. We must now bid “Adieu Culture” (Trouillot, Global Transformations).

Part 4: The Possibilities of Introduction to Anthropology

we can use anthropology to think about future possibilitiesClick To Tweet

For an Introduction to Anthropology based on the textbook Anthropology: What does it mean to be human? start with this YouTube lecture: