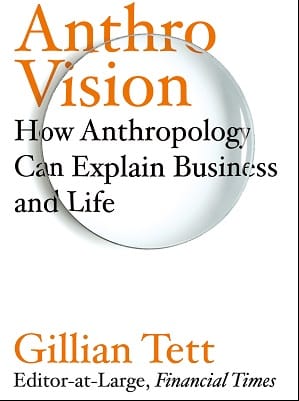 For 2021, I tried out the second edition of Introducing Anthropology: What makes us human? for a Cultural Anthropology 2021 course. I felt privileged to be able to continue teaching anthropology, especially as one of the textbook co-authors was forced into Anthropology Withdrawal Symptoms. Before the course, I paused to consider Pountney and Marić’s first sentence: “It is not an understatement to suggest that there has never been a more important time for the skills and insights that anthropology provides” (2021, vi). Is anthropology more important than ever?

Introducing Anthropology was not the only entrant claiming the present relevance of anthropology. Tag-teaming in from the UK was Gillian Tett’s 2021 Anthro-Vision: A New Way to See in Business and Life. “If there was ever a time when the discipline’s perspective is needed, it is now” (2021, 236). Like an introductory textbook, Tett attempted to reach audiences outside of anthropology. (Thanks to Cornelia for the tweet-tag [and see her follow-up to this post]. I prefer the UK cover and title for Tett’s book, as shown in the blog image, even if this Anthro-is-Important book duo begins to feel like a reprise of the British Invasion.)

Both of these books claim that the reason we need anthropology now more than ever is because we are increasingly confronting difference. For Pountney and Marić, it is “a time when differences between individuals and societies have become ever more significant” (2021, vi). For Tett, “our understanding of others has not expanded at the same pace as our interconnections” (2021, xiv).

Is anthropology more important than… in 1934?

Modern existence has thrown many civilizations into close contact, and at the moment the overwhelming response to this situation is nationalism and racial snobbery. There has never been a time when civilization stood more in need of individuals who are genuinely culture-conscious, who can see objectively the socially conditioned behaviour of other peoples without fear and recrimination. (1934, 10-11)

I suspect that similar claims have been made from 1934 through the present. In retrospect, however, Benedict may be objectively correct in pinpointing the 1930s as a time most in need of anthropological insight, understanding, and tolerance.

If it is a fair interpretation that at least since 1934, probably in every decade, people have been claiming that anthropology is now more important than ever, it is also fair to ask: What happened? Why is the contemporary importance of anthropology a constant refrain? Pountney and Marić assert that “students of anthropology not only see the world differently; they also see themselves differently and being a process of self-awareness that undoubtedly enriches their own lives and the lives of others as a result” (2021, vi; emphasis added). But if so, after all these many years of Introduction to Anthropology, shouldn’t we be wrapping things up by now? Shouldn’t a good portion of the world already have “Anthro-Vision”?

One of the first answers to the questions above–and one that is extremely satisfying for all who teach anthropology–is that we simply need more anthropology. This standard storyline begins with the premise that anthropology introduces radically new ways to view the world, and the fact that it hasn’t exactly worked (yet) is merely a function of not enough dissemination of anthropology. Supporters of this line of thought point to the relatively few anthropology departments and courses, even at the university level, and long for more robust inclusion in the academy or at an earlier grade level. This is the argument of Charles King’s Gods of the Upper Air: How a Circle of Renegade Anthropologists Reinvented Race, Sex, and Gender in the Twentieth Century: that the beloved founding figures of anthropology were renegades, radicals, who began an important work that is incomplete. (And yes, it is annoying that a Professor of International Affairs got to write a popular book about the material so many try to cover in Anthropology 101.)

This answer is a variant on the idea of More Anthropology! but it usually turns attention to the discipline, criticizing where anthropology went after the founding “renegades.” The argument here is that anthropology lost its way. Some contend that anthropology stopped writing in the spirit of Benedict’s Patterns of Culture (a founding idea of Living Anthropologically back in 2011). Others contend that anthropology became too divided or too specialized. Eric Wolf’s 1980 piece in the New York Times, They Divide and Subdivide And Call It Anthropology captures that ethos. Sidney Mintz held an allied opinion, repeatedly lamenting that no one wanted to teach Intro-to-Anthro.

As noted, Answers 1a and 1b are beloved by teachers and supporters of anthropology, as well as the chorus of people who think anthropologists should write for the public, etc. But even the most cursory look at how things have gone in recent years yields a more depressing conclusion: many of the people who are the most anti-anthropological are the ones who either went to elite institutions and did not get the message, or are explicitly reacting to the anthropological message. Hell, Charles Murray went to Harvard and did the Peace Corps. Steven Pinker’s career is built on bashing his own caricature of The Blank Slate.


Difficult to tell if it is feigned naïveté. Especially since we’ve already been through this back in 2018, and in 2012, when I wrote that the mantra “race is a social construction” primarily functions as a Goldmine for Conservative Politics.

A third and most pernicious answer is that anthropology has never been as committed to its values as it claims. Even for those who took anthropology courses, it all resulted in a US that elected Trump and the global rise of ethnonationalism. In my reflections on Sidney Mintz, I have long puzzled over the coincidence between the Michigan epicenter of resurgent White supremacy and the University of Michigan as the epicenter of the Intro-to-Anthropology megaclass.

This is a message that the exiled Discuss White Privilege has been saying for years, and she was way ahead of the curve in attempting to introduce anthropology to these issues. But after what happened in graduate school and continuing harassment, she is an emblem of how anthropology could have been so much better–and that many currently professing anti-racists from anthropology never took her intervention seriously.

This most troubling answer also seems close to the conclusion that Mark Anderson reaches in From Boas to Black Power: Racism, Liberalism, and American Anthropology. I’ve found useful Nicholas Barron’s review of the Anderson and King books, Renegades or liberals? Recent reflections on the Boasian legacies in American anthropology:

Would it be facile to suggest that, in a sense, both are correct? The Boasians did interrupt the biological view of race that undergirds the more overt forms of white supremacy, a necessary step in the creation of a future where the acknowledgement of difference does not automatically result in a hierarchy of humanity. That being said, the Boasians also did not fully interrogate the lived reality of racism/white supremacy or its imbrication in American liberalism, and this academic neglect of the social life of race and racism appears to mirror (if not support) some of the worst tendencies in mainstream politics. (2020, 8)

In over 10 years of blogging, I’ve struggled a lot with which of the above three answers is most correct. I think I rather agree with Barron that in terms of teaching cultural anthropology, all the answers are correct. Some students are awakened through anthropology. Others are primed for backlash. But what worries me the most is simply providing a palliative of cultural relativism and “anthropology is more important than ever” without at least humbly pondering to what extent anthropology continues to feed liberal naïveté.