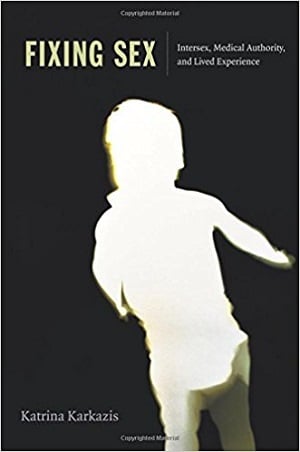 Katrina Karkazis is the author of Fixing Sex: Intersex, Medical Authority, and Lived Experience, which gets great reviews on Amazon. From the book description:

What happens when a baby is born with “ambiguous” genitalia or a combination of “male” and “female” body parts? Clinicians and parents in these situations are confronted with complicated questions such as whether a girl can have XY chromosomes, or whether some penises are “too small” for a male sex assignment. Since the 1950s, standard treatment has involved determining a sex for these infants and performing surgery to normalize the infant’s genitalia. Over the past decade intersex advocates have mounted unprecedented challenges to treatment, offering alternative perspectives about the meaning and appropriate medical response to intersexuality and driving the field of those who treat intersex conditions into a deep crisis. Katrina Karkazis offers a nuanced, compassionate picture of these charged issues in Fixing Sex, the first book to examine contemporary controversies over the medical management of intersexuality in the United States from the multiple perspectives of those most intimately involved.

Drawing extensively on interviews with adults with intersex conditions, parents, and physicians, Karkazis moves beyond the heated rhetoric to reveal the complex reality of how intersexuality is understood, treated, and experienced today. As she unravels the historical, technological, social, and political forces that have culminated in debates surrounding intersexuality, Karkazis exposes the contentious disagreements among theorists, physicians, intersex adults, activists, and parents—and all that those debates imply about gender and the changing landscape of intersex management. She argues that by viewing intersexuality exclusively through a narrow medical lens we avoid much more difficult questions. Do gender atypical bodies require treatment? Should physicians intervene to control the “sex” of the body? As this illuminating book reveals, debates over treatment for intersexuality force reassessment of the seemingly natural connections between gender, biology, and the body.

The Katrina Karkazis website is nicely organized and updated.

All of this usefully supplements Anthropology on Sex, Gender, Sexuality – as Social Constructions. Karkazis’s work is good anthropology on the timely issue of Olympic sex verification, but with wider relevance toward an anthropology of sex, gender, and sexuality.