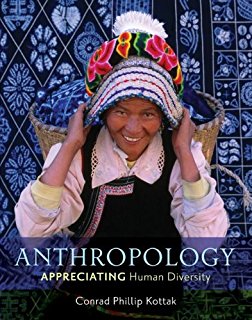 I have used Kottak Anthropology for a four fields Introduction to Anthropology. His textbook has been dependable and includes contemporary references. He seems to have the most links to New York Times articles, especially to reporting by John Noble Wilford. I also have liked how Kottak emphasizes colonial and world systems perspectives, including more references to Eric Wolf than other textbooks (see also Eric Wolf, Europe and the People Without History – Geography, States, Empires).

The 14th Edition seemed weaker than previous offerings. The Kottak line was set several editions ago, and the updates are to shuffle the chapters and insert pop culture references. It’s a tactic that shows wear, especially when findings change. In other arenas, Kottak Anthropology was also trying to blaze the way with readable texts (see Doubling-Down on Culture), but this textbook seemed rather unwieldy and with a tiny font.

Corresponds to Chapter 1, “What is Anthropology?” Kottak writes “culture is not itself biological, but it rests on certain features of human biology” (5). He then talks of the “biocultural” and how “cultural forces constantly mold human biology” (9). Later, Kottak again states “cultural habits, perceptions, and inventions mold ‘human nature’ in many directions” (28). Including human nature in quotation marks would lead to the idea Kottak could be taking a strong stance against. But Kottak Anthropology also approvingly cites Donald E. Brown on Human Universals, a move many anthropologists would find questionable (see Darwin in Mind–The End of Evolutionary Psychology for Anthropology). Kottak also approves of Geertz’s idea of culture as a “program” (27). Kottak’s discussion of genetics does not strive to complicate notions of genetic determinism. No discussion of maternal environment or infant development.

Kottak’s account of evolution is straightforward and does not include larger theoretical issues and debates. Like many other textbooks, he ends with a statement about punctuated equilibrium. Kottak does not discuss more recent evolutionary ideas like niche construction.

In the 14th edition, includes the American Anthropological Association Statement on “Race” (1998) in chapter 15 on “Ethnicity and Race” (340-341). Kottak discusses race along the lines of “prejudice and discrimination” (351), and not much on structural racism as economic and political inequality. He also includes the classic Kottak assertion “it probably is better to use the term ethnic group rather than race to describe any such social group” (341).

Kottak does a brief but good discussion of the Boas immigrant study (121). There are no references to contemporary craniometrics.

The police authorities always ask for the race of an unidentified person. But racial categories are, in part, culturally defined and in any case are not close biological “types.” Recently I identified a skeleton as possibly being Caucasian, then on subsequent examinations thought he might be African American. In actuality, when the identification was made, he turned out to be Hispanic. (78)

However, there is no discussion of the basis for identification, and the idea that Hispanic is a racial category is interesting (see Race Remixed?).

Although Kottak does use biocultural to refer to how culture constantly shapes biology, he does not make the connection of how race as a cultural category could become biology. Kottak has Peter Wade’s Race, Nature And Culture (2002) as a suggested reading, but does not explore it in the text, and he does not follow-up with Peter Wade’s later Human Nature and Race (2004) which explores how cultural race categories can be embodied. Kottak does not discuss IQ and race.

Chapter 7, “The Primates” is an overview. Discusses differences between bonobo and chimpanzee behavior, but does not make it clear that they could equally be considered as model of most recent common ancestor. Very little mention of stereotypes about non-human primate dominance or aggression. No discussion of human influence in the Jane Goodall studies.

Discusses bipedalism beginning p.163. No reference to bipedalism as learned behavior or as styles of walking.

Kottak speaks of “interrelated changes in biology and culture have increased human adaptability–the capacity to live in and modify an ever-wider range of environments” (192). However, does not emphasize these interrelated changes as a tool-use coevolution.

Kottak discusses the sequencing of Green et al. 2006 to argue for minimal interbreeding at best (211). Obviously does not mention the 2010 Neandertal sequencing or Denisovans, even though text is ©2011. Twice mentions “average Neandertal cranial capacity exceeded the modern average” (186, 200). Supports biological species concept without discussing definitional debates (109). Kottak Anthropology cites Wolpoff four times, three times as a reference for evolutionary history prior to Neandertals, and then includes him as one of “those scientists who still believe that Neandertals could have contributed to the ancestry of modern Europeans” (201). What will Kottak do for the 15th Edition?!

Kottak does not even refer to multiregionalism. He highlights “Out of Africa II” (208) and “Genetic Evidence for Out of Africa II” (211). Kottak approvingly describes Cann et al. 1987 three times, first as an example of a genetic dating technique (87), then as a way to debunk racial typologies (121) and finally in support of the replacement hypothesis (211). No diagrams of replacement or multiregionalism. Kottak uses neutral terms for human migration from Africa (contrast with Nicholas Wade’s biased language of “escape” from Africa). However, Kottak Anthropology talks of how modern humans “colonized Europe” (200) and then later “went on to colonize the rest of the world” (211). Asks “were the Neandertals outcompeted by modern humans or killed off by them?” (211) and then leaves this as a hanging question.

In general, Kottak seems to support a biocultural perspective, but he does not specifically discuss it. In other places he seems to approve of ideas of universals (see section 1.1).