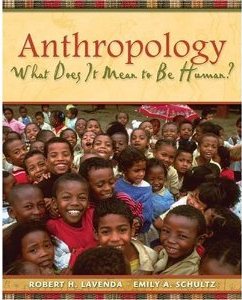 Although the first edition of Lavenda and Schultz is now dated, it is quite inexpensive. It remains conceptually strong.

Corresponds to chapter 1, “What is Anthropology?” Lavenda and Schultz included a short section on the importance of race in the history of anthropology (6), but it unfortunately made it seem like this was only a concern and problem for biological anthropology. Lavenda and Schultz discussed culture in terms of humans as “biocultural organisms” (4). Discussion of genes and genetics came later (38-45), and although it was good for complicating notions of genetic determinism, the material was so complex that the main points get buried. No discussion of maternal environment or infant development. General tone was against genetic or biological determinism, which has been a highlight of their textbook series.

Corresponds to chapter 2, “Why is evolution important to anthropologists?” Lavenda and Schultz discussed complexities of Darwin and the idea of “descent with modification” (34), also questioning evolution as a linear path (50). The ideas of genes and niche construction came up again in a chart (70-72), but the debate was difficult to follow. More discussion in section on “the future of human evolution” which questioned “law of the jungle” (75-76). Lavenda and Schultz emphasized niche construction throughout.

Race as a social category came up in chapter 14, “What can anthropology tell us about social inequality?” (434-6). However, the discussion was abbreviated, confusingly split into different parts, and did not spell out the economic-political implications of race in the United States.

Very short discussion of race revival with a reference to The Bell Curve (58-59). No mention of race revivals like “A Family Tree in Every Gene” (Leroi 2005), genetic ancestry testing, or race-based medicine–see Is Race “Real”?

This section corresponded to chapter 3, “What can evolutionary theory tell us about human variation?” which attempted to debunk traditional race notions. Lavenda and Schultz mainly used Frank Livingstone on clines (58-59), and a discussion of skin color (65-67) based on Jablonski The Evolution of Human Skin and Skin Color (2004). The chapter spent more time on evolutionary theory than human variation, and there was no discussion of craniometrics or forensic anthropology.

Lavenda and Schultz talked about “biocultural organisms” (4) at the beginning, and this got some follow-up when discussing human evolution (138, 151), agriculture (182-4), and to a certain extent with the discussion of “holism” in chapter 8 on culture (224). It did not get follow-through in the chapter “What can anthropology tell us about social inequality?” which talked about social categories as a “cultural invention” (422). They mentioned the “real” consequences of race, but only in passing (436). Addressed intelligence and IQ (66-68), mostly using cultural and socio-economic factors. Lavenda and Schultz did not mention ideas of stereotype embodiment or biocultural explanations, although there was a hint of possibility test-takers “may be hungry or ill or anxious” (68).

Chapter 4, “What can the study of primates tell us about human beings?” was a long and detailed look at non-human primate richness and variability, but a main point, “flexibility as the hallmark of primate adaptations” (101) got buried. Bonobos discussed (100-101) but did not emphasize that bonobos can be considered equally related (along with chimpanzees) to most-recent-common ancestor with humans. No discussion of ethnoprimatology, although brief mention of human-primate interconnection in the context of conservation (102).

Lavenda and Schultz discussed bipedalism (112-117). No reference to bipedalism as learned behavior or as styles of walking.

Lavenda and Schultz discussed stone tools (123), but did not use this as evidence for co-evolution. They emphasized niche construction at the end of this chapter, relating it to Clive Gamble’s Timewalkers (1994) and Richard Klein’s 1999 edition of The Human Career: Human Biological and Cultural Origins (150-151).

A short discussion (140) left open the question of interbreeding. Textbook was ©2008, before 2010 Neandertal sequencing and Denisovan finds. Mentioned how “the average Neandertal cranial capacity is actually larger than that of modern human populations” (133). Basically support the biological species concept and not rigid definitions of species (56).

The “replacement model” came first and was given more emphasis. There was the report of no Neandertal contribution to mtDNA, but included references noting how this is inconclusive (Relethford 1998; Templeton 1998). Although Wolpoff got a shorter treatment as the “regional continuity model,” the textual commentary is a fair depiction (132). However, the diagram of regional continuity is nothing like Weidenreich’s trellis, although it is not as extreme as Coon’s candelabra (133). No references after 1998 in this section (this was one section that desperately needed an update after 2010). Lavenda and Schultz used neutral terms for human migration from Africa (contrast with Nicholas Wade’s biased language of “escape” from Africa). Lavenda and Schultz also stated “there is no evidence that the replacement of Neandertals by modern people involved conquest and extermination,” instead talking of differences in reproduction rates (143).

Lavenda and Schultz used Richard Potts’s Humanity’s Descent (1996) to talk about “survival of the generalist,” plasticity, and open programs of behavior (149-150), but these points could be more headlined. The overall tone of the book was consistent with biology as a broad platform for human learning (4). This edition included a great sentence from Vygotsky: “The social dimension of consciousness is primary in time and in fact. The individual dimension of consciousness is derivative and secondary” (294). However, this material occurred deep in the language chapter and was not used as an organizing insight, even about language learning.

To cite: Antrosio, Jason. 2012. “Lavenda and Schultz First Edition: Anthropology, What does it mean to be human?” Living Anthropologically website, https://www.livinganthropologically.com/lavenda-and-schultz-first-edition-anthropology/. First posted 3 July 2012. Revised 26 May 2019.