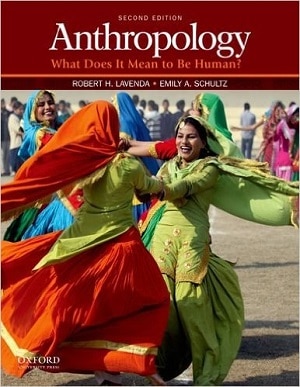 Lavenda and Schultz consistently emphasize human variability and particularity, that there is no fixed human nature outside of history and culture. They see humans as biocultural organisms and see anthropological holism as a perspective where “no sharp boundaries separate mind from body, body from environment, individual from society, my ideas from our ideas” (219). They could at times be more explicit about the people and approaches they are arguing against. Steven Pinker’s The Blank Slate, for example, goes unmentioned. Discussion of genes and genetics is in chapter 2 (39-50), and although it is good for complicating notions of genetic determinism, the material is so complex the main points get buried. Little discussion of maternal environment or infant development. General tone is against genetic or biological determinism.

In their discussion of evolution, Lavenda and Schultz is one of the few anthropology textbooks to go beyond Stephen Jay Gould’s debate about punctuated equilibrium in 1972. They stress niche construction as particularly helpful for an anthropological approach to understanding evolution (50-52). Schultz published on these matters in Resolving the Anti-Antievolutionism Dilemma: A Brief for Relational Evolutionary Thinking in Anthropology, and it is a welcome contribution to see this expertise brought to the textbook.

Lavenda and Schultz could do better on this point. Race as a social category comes up in chapter 14, “What Can Anthropology Tell Us about Social Inequality?” (417-418). However, the discussion is abbreviated, in the context of a long and complicated chapter, and does not spell out the economic-political implications of race in the U.S. There is a nice excerpt from Elizabeth Chin’s Ethnically Correct Dolls: Toying with the Race Industry (1999), but it helps to have read Chin’s book, Purchasing Power: Black Kids and American Consumer Culture.

Although there is not much explicit discussion of race revival pieces like A Family Tree in Every Gene (Leroi 2005), Lavenda and Schultz feature one of the more sophisticated discussions in anthropology textbooks, including a section on the “molecularization of race” (60) and a discussion of race, medicine, and DNA testing, including Ron Nixon’s DNA Tests find branches but few roots (63-65).

Corresponds to chapter 3, “What Can Evolutionary Theory Tell Us about Human Variation?” which debunks traditional race notions. Lavenda and Schultz mainly use Frank Livingstone on clines (60), and a discussion of skin color (70-71) based on Jablonski The Evolution of Human Skin and Skin Color (2004). This chapter spends more time on evolutionary theory than human variation. No discussion of craniometrics or forensic anthropology, and it seems the articles from Race Reconciled would have been an opportune supplement.

Talk about “biocultural organisms” (6) at the beginning, but this could have better follow-through. Chapter 14, “What Can Anthropology Tell Us about Social Inequality?” stresses social categories as a “cultural invention” (406). Mentions the “real” consequences of social race categories, but only briefly (418). Addresses intelligence and IQ (72-73), mostly using cultural and socio-economic factors.

For primatology, Lavenda and Schultz stress “flexibility as the hallmark of primate adaptations” (102). Their chapter on primates is, if anything, almost annoyingly un-classificatory, and they explain how “most primatologists would probably caution against taking any single primate species as a model of early human social life” (96). Bonobos discussed (101-102) but do not emphasize that bonobos can be considered equally related to most-recent-common ancestor with humans. No discussion of ethnoprimatology, although brief mention of human-primate interconnection in the context of conservation (102).

Lavenda and Schultz discuss bipedalism (112-117). No reference to bipedalism as learned behavior or as styles of walking. I do enjoy the discussion of hominins as endurance walkers and even as “endurance hunters” (113) drawing on Michael Day’s Bipedalism: Pressures, origins, and modes

(1986) which is then extended into endurance running from Lieberman and Bramble, The Evolution of Marathon Running Capabilities in Humans. Growing up in Montana, I heard stories of people who did endurance hunting to run down deer, so this immediately made sense to me.

Discussion of stone tools as “Earliest Evidence of Culture” (122-124) but Lavenda and Schultz do not use this as evidence for co-evolution or to extend biocultural understandings. They return to niche construction at the end of this chapter on human origins (147-148), relating it to Clive Gamble’s Timewalkers (1994) and Richard Klein’s 2009 edition of The Human Career.

Lavenda and Schultz is the only anthropology textbook in 2012 to include not just Neandertal admixture information but also news of Denisovan discoveries (139). Lavenda and Schultz were already some of the best at accurately explaining multiregional evolutionary models (see first edition review), and eliminating a misleading graphic from the first edition enhances the account. They see current findings as consistent with John Relethford’s “mostly out of Africa” model (131).

The overall tone of the book is consistent with biology as a broad platform for human learning. Includes a great sentence from Lev Vygotsky: “The social dimension of consciousness is primary in time and in fact. The individual dimension of consciousness is derivative and secondary” (268). However, this material occurs deep in the language chapter and is not used as an organizing insight, even about language learning.

For example, Rick Potts argues that, rather than “survival of the fittest” (i.e., of a species narrowly adapted to a specific environment), modern H. sapiens better illustrates “survival of the generalist” (i.e., of a species that had the plasticity, the “weedlike resilience,” to survive the extremes of the rapidly fluctuating climate of the Ice Ages). . . . In Potts’s view, selection for genes favoring open programs of behavior “improve and organism’s versatility and response to novel conditions” (1996, 239). [147]