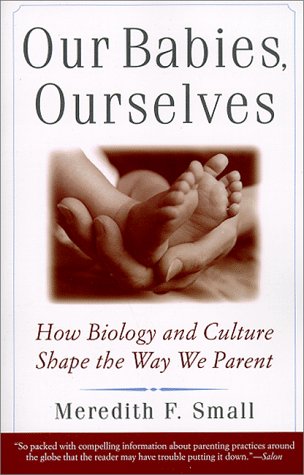 Our Babies, Ourselves by Meredith Small

The most obvious first lesson, which follows naturally from Horace Miner’s Nacirema article, is about how many different ways there are to raise children. Everyone is a little bit ethnocentric about babies. The Gusii mothers are appalled at our babycare behavior, just as we might wonder about their baby-raising. As Jared Diamond asked in 2012, What Can We Learn from Traditional Societies? Certainly one lesson is about closeness and quick attention to crying. Diamond concludes, “the prompt responses of hunter-gatherer parents to infants crying do not consistently lead to children who end up conspicuously lacking in autonomy and self-reliance and other virtues.” Diamond in fact lauds what he glimpses as a greater autonomy and self-reliance.

Alex Golub recommends Meredith Small as a favorable alternative to Jared Diamond on these matters. I agree. One reason I prefer Meredith Small is that she also highlights variation within industrialized countries. One of her featured examples is from Dutch parenting, revealing that the differences are not limited to far-away others.

The part of Meredith Small I really want to emphasize is in her discussion of humans born as “neurologically unfinished” (2012:218). The idea here is to introduce culture, history, and learned behavior as essential in the development process, crucially present during the natural wiring up of the brain. This is essentially a first approximation of understanding what anthropologists mean by holism and biocultural understandings. Or, as in a textbook for Introduction to Anthropology:

Most anthropologists reject explanations of human behavior that force them to choose either biology or culture as the unique cause. Instead, they emphasize that human beings are biocultural organisms. . . . Human biology makes culture possible; human culture makes human biological survival possible. (Anthropology: What Does it Mean to be Human? 2018, 7)

It’s an attempt to gently introduce the ideas of Anthropology and Human Nature–that there is no such thing as a human nature outside of particular histories and circumstances. That there is not–as at least some people want–a universal prescription or universal baseline of babycare. I also sometimes use this as a way of introducing what Franz Boas found in the immigrant head form studies.

It may be worth point out here, as evident in Mothers and Others: The Evolutionary Origins of Mutual Understanding by Sarah Blaffer Hrdy, is that what does seem to be a universally true baseline is that humans are cooperative breeders: infant care is always social, always intensely close. Nevertheless, attempts to delineate universal or baseline techniques always falter.

Is it culture or power?

My one quibble with Meredith Small’s article is that it sometimes glosses as cultural difference what might actually be issues of power and choices made under difficult circumstances. This is a lesson indelibly impressed from any reading of Nancy Scheper-Hughes Death Without Weeping: The Violence of Everyday Life in Brazil, when parents leave infants with young siblings not out of choice or culture, but because that is what they must do to survive.

I know I have helped residents broaden their views when their lectures on good mothering are replaced by such comments as ‘What a gorgeous baby! I can’t imagine how you manage both work and three others at home! (2012:218)

Indeed, let us all spare our lectures and good mother sermonizing. However, how is this woman managing work and three at home? Is older-sibling care really what she would choose? Is that culture? Or is it power and inequality? Put differently, when Jared Diamond shows us a picture of a “Pume Indian baby playing with a large sharp knife” is this really (as he labels it) “traditional child autonomy”? Or is it a lack of resources to provide toys and supervision?

Most potently, the lesson here is not what we can learn from distant others, but rather about how politically-charged and impossible it has been to get parental-leave policies and childcare in the United States.

The Politics of Childcare

Childcare–who gets it, and at what quality–is incredibly political. Back in 2013, President Obama’s proposal for universal pre-school seemed radical and remained out of reach. Columnist Gail Collins in The State of the 4-Year-Olds traced the proposals back to the 1970s and former vice president Walter Mondale:

In 1971, when he was a senator, Mondale led the Congressional drive to make quality preschool education available to every family in the United States that wanted it. Everybody. The federal government would set standards and provide backup services like meals and medical and dental checkups. Tuition would depend on the family’s ability to pay.

And it passed! Then Richard Nixon vetoed it, claiming Congress was proposing “communal approaches to child rearing.” Now, 42 years later, working parents of every economic level scramble madly to find quality programs for their preschoolers, while the waiting lines for poor families looking for subsidized programs stretch on into infinity.

In other words, the bill was blocked for precisely recommending what anthropologists like Meredith Small and Sarah Blaffer Hrdy say is most necessary and species-appropriate for raising children: communal approaches to child rearing.

People, think about this for a minute. We have no bigger crisis as a nation than the class barrier. We’re near the bottom of the industrialized world when it comes to upward mobility. A child born to poor parents has a pathetic chance of growing up to be anything but poor. This isn’t the way things were supposed to be in the United States. But here we are.

Would it be different if all the children born over the last 40 years had been given access to top-quality early education–programs that not only kept them safe while their parents worked, but gave them the language and reasoning skills that wealthy families pass on as a matter of course?

In 2018, I think we do know it could have been different. We could have had quality preschool education for all in the United States. Instead we have teachers without pay and healthcare. Students on a #MarchForOurLives. And a tax scam for the wealthiest that bankrupts the country.