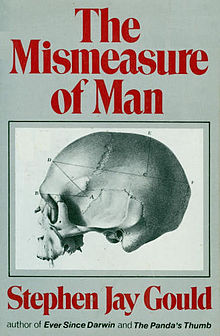 The Mismeasure of Science

In the 2011 Plos Biology “The Mismeasure of Science: Stephen Jay Gould versus Samuel George Morton on Skulls and Bias,” six anthropologists reassessed Gould’s famous 1981 book, The Mismeasure of Man. Although I find anthropology’s alliance with Gould problematic, there is a need to understand historical context. Gould’s book became popular because it was anti-racist, not because it was anti-science. In its time, Gould probably did more to rescue science than to demean it. Contemporary critiques of Gould occur in a context in which notions of biological race and racism are resurgent. Navigating the political-academic climate demands awareness and treading carefully.

It appears Gould was wrong about Samuel Morton and his skull measurements. In “The Mismeasure of Science,” Morton becomes the careful and objective scientist, Gould becomes the ideologue. On his widely-read blog, Gould’s ‘Unconscious Manipulation of Data’, John Hawks notes “the authors wrote in an even tone and lay out the facts in a very straightforward way. As a reader, I can’t see how they managed to keep their cool.” Hawks goes further: “This stuff really ticks me off. I don’t think that Gould’s errors can be written off as ‘unconscious bias’. Reading back over his 1978 article, I cannot believe that Science published it.” Hawks recommends “everyone should read [The Mismeasure of Science]. . . . It is a very suitable article for assignment in classes.”

Toward the goal of everyone reading this study, Nicholas Wade helped out with an article in the New York Times, Scientists Measure the Accuracy of a Racism Claim. Wade has always pounced on anything that might validate traditional race categorizations. Wade leaves the last line for Ralph L. Holloway, one of the study co-authors: “I just didn’t trust Gould. . . . I had the feeling that his ideological stance was supreme. . . . I just felt he was a charlatan.”

I agree anthropology’s alliance with Gould has been problematic. First, using Gould in introductory textbooks makes anthropology look dated and out-of-touch with contemporary biology. Second, Gould consistently misinterpreted and misrepresented multiregionalism, which stymied an anthropological alternative to the Mitochondrial Eve hypothesis (see section More mothers than Mitochondrial Eve). However, this thorough trashing of Gould as an anti-science charlatan misreads the historical and contemporary context.

We read Gould because he was anti-racist, not anti-science

I first read parts of the Mismeasure of Man in an undergraduate class on the history of imperialism. The point of reading Gould was not to impugn scientific inquiry, but to show the problems of harnessing scientific inquiry to racism and colonialism. I cannot of course do a systematic survey of how professors use Gould today, but I suspect Gould is still used more to illustrate how science must be careful to examine its premises and role in society, and less as a diatribe about how science is inevitably ideologically tainted.

There is no reason to doubt the study’s claim that Morton was a quite objective and careful analyst. However, in going after Morton, Gould was tackling a kind of exemplary character for an entire era: Morton was measuring skulls and reporting results by a racial hierarchy, providing justification for colonialist and racist practices. As the study authors report, “we do not dispute that racist views were unfortunately common in 19th-century science.”

But the problems extend beyond simply measuring and analyzing skulls–there is also the issue of how Morton acquired an enormous skull collection. Morton did not himself collect skulls, but he did promote their collection. As an official brochure on the Morton Cranial Collection notes, “the endeavor was so significant that army surgeons stationed in remote areas of the world would take great risks to obtain crania for Morton, and they were not above robbing graves in order to do so!” (It is interesting to note how often people use the passive voice to describe Morton’s skulls, as in “were collected” or “were obtained.”)

In the context of the time when Gould was writing The Mismeasure of Man, the scientific enterprise was indeed under severe critique for both participating in colonial racist practices and supporting those practices with analytical justifications. Gould’s writings offered hope that scientific inquiry could correct past mistakes and excesses. At a time when science was under direct attack, Gould helped to save, rescue, and shield science as a potentially still-noble enterprise. (Gould was writing during a time when revisionist interpretations thoroughly questioned the traditional progressivist stance. This paralleled factors influencing Jared Diamond’s Worst Mistake in the History of the Human Race.)

Debunking Gould in a climate of race resurgence

The contemporary climate is quite different. Today, science is not under the same kinds of attack. Instead, we are experiencing race resurgence and an assault on anti-racist views. The authors of this study seem unaware of the present climate and how their study plays directly into it.

The authors write as if race were already thoroughly debunked: “Studies have demonstrated that modern human variation is generally continuous, rather than discrete or ‘racial,’ and that most variation in modern humans is within, rather than between, populations.” Here, they sound very much like Lewontin, and their sources for this statement are dated: they cite Loring Brace as well as Matt Cartmill, The Status of the Race Concept in Physical Anthropology (1998). Both are fine sources, but neither address the works of race resurgence, such as “Lewontin’s Fallacy” and the New York Times Op-Ed on “A Family Tree in Every Gene” (see blog-section on Race Revival). The authors use Brace’s 2005 book “Race” Is a Four-Letter Word several times, as an example of how Gould is still used, as someone who questioned Gould, and as a source for debunking the race idea. If Brace already accomplished all this, I would much rather use his book in class than this study.

If the authors are sincere that they “find other things to admire in Gould’s body of work, particularly his staunch opposition to racism,” then they need awareness of what is going on with regard to race resurgence and to help us with more contemporary references combatting that resurgence. A good place to start could be the articles in Race Reconciled in the 2009 American Journal of Physical Anthropology (for a summary, see “Race Reconciled” re-debunks race).

The take-away headline from this study is “Gould was wrong, Morton was right.” In a climate of race resurgence, this is treacherous territory. Nicholas Wade, of course, makes no mention of any race debunking or how the authors share Gould’s opposition to racism. Instead, Wade inserts this troubling line: “When [Gould’s errors] are corrected, the differences between the racial categories recognized by Morton are as he assigned them.” Without bothering to question Morton’s racial categories, Wade appears to assert that in fact Morton’s cranial measurements by race are validated.

On a True Mismeasure of Science

The authors try to frame the larger framework of their study in terms of its impact on science studies. They claim the Morton case “shows the ability of science to escape the bounds and blinders of cultural contexts.” However, this is at best a minor sparring point for a dispute internal to academia. I say “at best,” because it is not even a sparring point for people doing a true history of science, for whom the question of “bias” has long been eclipsed by documenting particular practices and particular analytical techniques. (Kenan Malik has some very nice reflections on this piece and what it means for science-society at his blog-post The science of seeing what you want to see.)

Regardless of whether science can “escape the bounds and blinders of cultural contexts,” the results of science must still be presented within a particular historical and political context. The authors of this study seem blissfully unaware and naïve about that contemporary context. Nicholas Wade’s quick coverage should be a wake-up call. In a context of race resurgence, and without providing contemporary support for anti-racist scholarship, this study will soon ricochet through the conservative blogosphere–and many undergraduate classrooms–as “Gould was wrong, Morton was right; cranial capacity and race is like Morton said it was.”

Update 2013: I received an e-mail alert from the undergraduate who originally measured the Morton skulls and who has posted a 4-part personal commentary on Stephen Jay Gould and Samuel George Morton. Looking through that material, and the kinds of commentaries it prompts, and then back at this post leads me to re-state the following points: