The proposition which would have kept all four Oneonta elementary schools open did not pass. Center Street School will close at the end of this school year. We gave it our best effort to campaign on facts and realities, garnering over 700 Yes votes for an additional 5.15% tax increase, but in the end were overwhelmed by the emotion and sentiment of no-new-taxes. Michael Forster Rothbart and his photojournalism students (including anthropology majors Michelle O’Dell, Emily Keaney, and Lindsay Zweigenhaft) have been documenting these events, and presented a full slideshow of their work to the entire Center Street School on May 24 at a special Sing and Celebrate.

When I voted, I felt rather like Walter Mondale in 1984. I was the candidate who most tried to frame Proposition 1 as not just about Center Street School but as about an education boost across the district, an addition to the base budget that would positively mark Oneonta as supporting education and downtown revitalization. Unfortunately the “What were you thinking?” skit from Saturday Night Live does not seem to be online, but after the 1984 election they lambasted Mondale with something like: “You’re the only candidate in the history of elections–federal, state, local, unincorporated hamlet–to ever promise that you would raise taxes. . . . My question to you is: What were you thinking?!”

As this was going down, Center Street School Librarian Mark Parmerter reminded us of 1981, when Oneonta residents voted 1773 to 784 to keep Center Street School, despite declining student enrollment (click for the Center Street School timeline). This historical reminder sent me to local historian Mark Simonson’s Center Street School stays open thanks to voters in 1981. The parallels seem almost spooky–with declining enrollments and building costs, the board abruptly puts the matter to a vote. Parents research and write an editorial in the Daily Star. A board committee counterattacks with a mailing, claiming a savings of “$961,000 over five years by cutting six teaching positions and eliminating maintenance costs on the building.”

Even the total number of votes is nearly identical, but the outcome is reversed: 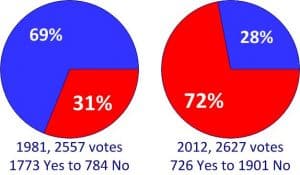 But this raises more questions than answers. Why didn’t Oneonta close Center Street School in 1981? It would have seemed everything was trending away from the small town and downtown neighborhoods. People were moving, stores were moving, enrollments declining, building maintenance costs increasing. Instead, the Oneonta of 1981 doubled down on the neighborhood school, and over the last 30 years built enrollments, removed asbestos, bought land for new playgrounds, wired the building for internet, installed an elevator and ramps for the disabled, put smart boards in every classroom. In 2012, people are trending toward downtown neighborhoods, trying to revive the ideas of local business and local living. Why now?

I definitely have some historical research to do–I have to dig up that 1981 editorial and compare it to the Ten Myths about the Oneonta School Budget and to Seven Reasons to Vote for a School Tax Increase. I should have started by heading to the archives.

Part of this must have to do with numbers. After all, it looks like 1981 voters were not asked to tax themselves to vote yes. The savings projected in 1981 would have been about $486,000/year in inflation-adjusted 2012 dollars. That’s about half the savings that are currently projected, and so would have been more like a 2.5% tax increase. We may have been able to pass a 4.3% increase (1.8% + 2.5%), as this is a level Oneonta voters have historically supported, and it is under the level some New York school districts were able to propose while remaining under the tax cap.

But some of it must have to do with demographics and values. May 1981 was long ago, before extensive suburbanization, and just before the August 1981 Air Traffic Controller Strike.

We seem to be entering a time when our decisions could become very important to lay the groundwork for the kind of Oneonta which will emerge. I close with adapted observations from Diane Ravitch and her book The Death and Life of the Great American School System: How Testing and Choice Are Undermining Education

Do we need neighborhood public schools? I believe we do. The neighborhood school is the place where parents meet to share concerns about their children and the place where they learn the practice of democracy. They create a sense of community among strangers. As we lose neighborhood public schools, we lose the one local institution where people congregate and mobilize to solve local problems, where individuals learn to speak up and debate and engage in democratic give-and-take with their neighbors.

American education has a long history of infatuation with fads and ill-considered ideas. The current obsession with making our schools work like a business may be the worst of them, for it threatens to destroy public education. Who will stand up to the tycoons and politicians and tell them so?