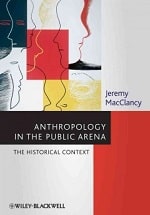 It was a great honor and privilege to be invited to deliver the Cultural Anthropology overview for the Five Fields Update sponsored by the Society for Anthropology in Community Colleges. Special thanks to Laura T. González for organizing, and to fellow panelists Barbara J. King, Bob Muckle, Steven P. Black, and Alisse Waterston. Below is my presentation, a draft of what became a publication in Teaching Anthropology: SACC Notes.

With the publication of Jared Diamond’s The World Until Yesterday, which not only drew on Napoleon Chagnon, but was closely followed by Chagnon’s own memoir, Noble Savages, some of the big issues of anthropology were thrown back into the public sphere–what is human nature? What is the influence of culture? And, with the images of Newtown, long-running military action in Afghanistan and the prospects of military strikes in Syria, the question of the naturalness of human violence and the influence of Steven Pinker, a big supporter and promoter of both Chagnon and Diamond, looms large.

And so as we enter our classrooms, every term of cultural anthropology is already up for debate, hashed out in Op-Eds and ever-proliferating blog-posts. At one point in time, the professor could maintain, at least for a short window, the aura of the local expert. Armed with a book and an authoritative voice, you could probably convince them that your ideas about culture and cultural relativism were most important, because: Yes, this will be on the exam. While some of that is still possible today–only about five percent of my students say they’ve heard of Jared Diamond, and I still write the exams–the fact is that anyone with a smartphone can be looking up the keywords from the lecture, or tweet out real-time misinformation on the #AAA2013 hashtag. Just this week, a link to my link of Diamond reviews garnered over 200 comments, and over 600 hits back to my website from Metafilter, which was new to me but is apparently cool.

What do you do when you know anthropology is still the best way to understand the world, but every anthropological term is up for debate?

My own approach has been to ease open the classroom door just a bit. I’m not ready to put a twitter stream up on the big screen, but I have been starting to preview a lecture with a blog-post, then ask students to comment via social media. What’s been most interesting about that is how this tends to crowdsource the lecture. Even though the comments come mostly from other anthropologists and professors, it becomes obvious (sometimes in ways that are more painful than others), that I may not have all the truths in the room. I do, of course, worry that the students are not any more engaged, and that they view these efforts as more things to not read. It’s also a lot of work! However, it seems that if we want to model how students we engage with the counter-arguments, then we a bit of exposure to the cacophony of voices.

The other great thing about this experience is tapping into anthropologists who have a public presence, and have often been involved in critiquing some of the worst interpretations about others. There are a lot of great books out there, and though I hesitate to mention any because I’ll be leaving out someone else, here are a few I’ve been teaching, been looking forward to reading, or are books I’ve found from reading those who have columns, blogs, or reviews of other work.

Now more than ever anthropologists are doing work that explains the world, better than those in other discipline. As Rick Salutin put it in the Toronto Star, “I keep encountering anthropologists who help more in understanding how the world works today than other experts do, even in their own fields.” Anthropologists explain economics better than the economists, politics better than the political scientists, and have qualitative and quantitative expertise on issues like immigration which is simply unmatched. Certainly there are issues that could use more anthropological attention–gun reform comes to mind–and there are a lot of places in which anthropology still needs to get rid “of some of its shyness and spells out its stakes for a wider audience” (Trouillot 2003:137), but in general we’ve come a long way.

Also this year, the Society for Economic Anthropology joined the American Anthropological Association. It’s an important step–it demonstrates how the prevalent idea that people or groups or sections are fleeing the AAA is probably the opposite of what is going on. This join-up is particularly important because it integrates a group that focuses on empirical data measures and tends to enjoy quantification.

Of course, this is not to say that all is well or that the discipline does not face incredible perils. Having recently (thank goodness!) just completed a manuscript draft with my colleague Rudi Colloredo-Mansfeld on artisan economies in the northern Andes, it is interesting to cross this with Tim Ingold’s statements that anthropology is essentially an artisan craft

, drawing on C. Wright Mills and the notion of intellectual craftsmanship.

If we think of anthropology as artisan craft–and I admit that may be difficult when surrounded by 7000 anthropologists in Chicago–it may help us realize that anthropology is far from doomed. Like the Andean artisans who were supposed to be eliminated by industrialization but now have inhabited and re-appropriated the post-industrial relics of development and modernization projects–what Rudi and I call the “invasive economies” of contemporary artisans–anthropology is poised to face the challenges resulting from the post-industrial face of higher education. Inhabiting the crevices of community colleges, joint departments, interdisciplinary outliers, combining applied work and non-traditional activities, anthropologists have long been in a must-make-do situation.

However, like the Andean artisans we study, while we can admire their craft, industriousness, and market acumen, we must be aware that being an artisan is not–as pundits like Thomas Friedman would have it–a solution to the problem of stagnant wages and the collapse of stable employment. Rather, there is the constant risk of artisan bid-down, a churning competition which results in meager earnings, no benefits, no security: exactly what we see for current trends in adjunct labor. Artisans can be rapidly displaced and replaced, vulnerable to the same invasive economies that made their work possible in the first place.

Moreover, we’ve discovered that these new artisan economies are very much structured by a winner-take-all payout system. Even within small communities of seemingly homogeneous artisan workshops, a few fortunate entrants end up with the bulk of the winnings. From faja belt-weavers to Tigua painters, earnings concentrate in a big pay-out, which somewhat paradoxically encourages a much larger group of artisans to keep on toiling. Keeping an at-least part-time artisan operation going is a chance to tap the cash. Or, in academic lingo: Was that a tenure-track position that just went by?

This reality becomes all the more salient when we return to the anthropology blogosphere and the Twitter stream. The emergence of the internet has paralleled the winner-take-all economy, and although there are new entrants and new claimants, it continues to be structured along traffic patterns in which the top sites get almost all the traffic. Anthropology must be honest that in our move to the blogosphere, we are potentially setting the stage for a new reality of internet-Twitter stardom.

This then, takes us back to people like Jared Diamond and Steven Pinker who inhabit and dominate this academia-and-new-media space, leveraging the toehold of positioning in a science field in order to become pop-critics of everything. We step into a space in which the debates about human nature are themselves conducted as winner-take-all payouts.

Nevertheless, as with Andean artisans, such competition and earnings structures need not be cause for despair. Among these artisans, we saw glimpses, sometimes fleeting, sometimes more durable, of ways in which artisans were able to fashion a public economy, or in other cases, an economy with identity. We can similarly be encouraged by a revival of debate and good writing within cultural anthropology, cross-cutting with new links to an integrative five-field anthropology.

As Tim Ingold has recently enjoined us:

We should spend less time just talking to ourselves. Anthropology is still notably absent from the big public debates surrounding the past, present and future of humanity, the sustainability of life and the environment, and so on. . . . Thus while the internal debate about anthropology’s theoretical and intellectual foundations has indeed been revitalized, we now need to take the debate “out of doors,” and to engage with much wider interdisciplinary and lay audiences. That’s our task for the next decades.

Please join in taking anthropology out-of-doors, taking our teaching out-of-doors, something that the Society for Anthropology in Community Colleges has already been doing for longer and with greater commitment than me. I thank them for this invitation.