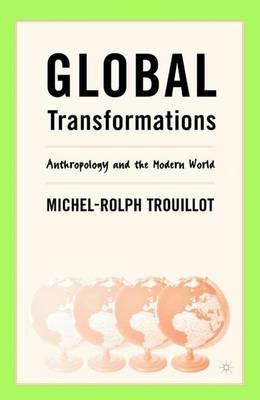 Update: This 2013 post on the “Purpose of Anthropology,” drawing on Trouillot’s Global Transformations, saw renewed attention since 2016. This may be due to people searching for the supposed quote from Ruth Benedict: “The purpose of anthropology is to make the world safe for human differences.” As Ryan Wheeler detailed, Benedict may have never said exactly those words. My comment there: “I have always felt that the ‘purpose of anthropology’ quote is more of an encapsulation of Benedict’s last paragraph of Patterns of Culture. You are correct that it shows up more closely in Chrysanthemum, but there it takes on a strange almost nationalist hue.”

However, as I outlined in Doubling Down on Culture in Anthropology, Delaney never diagnoses the idea of culture. Delaney does not help us navigate a world in which culture is now everywhere.

In 2013 I decided to go directly to the book I had been trying to use as a back-text for Cultural Anthropology since 2003. I assigned Michel-Rolph Trouillot’s Global Transformations. It was a somewhat insane idea. Although I’ve had a guest post on Teaching Trouillot for graduate courses, I am pretty sure that only Gina Athena Ulysse and I are the only ones who have assigned Trouillot’s book to undergraduates. But Trouillot’s message, if not the text, should be part of our cultural anthropology courses, even at the undergraduate level.

As I was preparing to teach in 2013, got a comment on the Living Anthropologically Facebook timeline: “Anthropologists are or were working as spy agencies for military and imperialism around the world. They think that they can speak on behalf of people and their cultures. It is a joke.”

What would Trouillot say?

Anthropology emerged in the nineteenth century as a separate discipline specializing in the occupants of the Savage slot. To put it differently, anthropology as a practice is part of the very geography of imagination that it seeks to understand. Anthropology as a discipline emerges from the projection of the West, from the gap between the Here and the Elsewhere, in ways that no other discipline does. No wonder it has been accused of being an inherent tool of North Atlantic power in ways that no other discipline has been charged, as being a child of both colonialism and imperialism. These charges are deserved only to the extent that many anthropologists have ignored the duality of the West and thus the global inequalities that make their work possible. (Trouillot 2003, 2)

Yet if the West is a claim to universal legitimacy, it is fair to say at anthropology’s partial discharge that no other discipline has sustained such an explicit questioning of that claim. Thanks in part to anthropology, many humans inside and outside of the North Atlantic now accept the proposition that there may not always be one way for collectivities to do the right thing, that goals and values, truths and practices deemed to be self-evident and therefore universal in one place are not necessarily accepted as such elsewhere. (Trouillot 2003, 3)

That was a good set-up for the first book of the class, Ruth Benedict’s 1934 Patterns of Culture. Benedict’s book is certainly flawed, but the strength of her relativizing mission cannot be underestimated. (For more see Benedict and the Concept of Culture.)

2013 was a time when debates between the sciences and the humanities were raging. Steven Pinker had just put out an essay called Science Is Not Your Enemy. But anthropology knew about these tensions long ago. “Because of their discipline’s location at the borders of the institutionalized divide between the humanities and the social sciences, anthropologists have had the leisure to look both ways–and often enough took advantage of this duality. What we need to do today is to systematize the benefits of that doubly ambiguous location at the border between the humanities and the social sciences and between the Here and the Elsewhere” (Trouillot 2003, 3).

In this quote there was an intersection with a First Year Seminar I taught on Tim Ingold’s Being Alive: Essays on Movement, Knowledge and Description:

The truth is that the propositions of art and architecture, to the extent that they carry force, must be grounded in a profound understanding of the lived world, and conversely that anthropological accounts of the manifold ways in which life is lived would be of no avail if they were not brought to bear on speculative inquiries into what the possibilities for human life might be. Thus art, architecture and anthropology have in common that they observe, describe and propose. (Ingold 2012, xi)

Purpose of Anthropology: Addressing Rise of the Financiers

“In no way can a symbolic analysis of globalization today avoid addressing the rise of the financiers” (Trouillot 2003, 3). See the essay series and bibliography posted by Keith Hart and Horacio Ortiz, The anthropology of money and finance: from ethnography to world history. See also Public Anthropology and Bill Gates: We Cannot Abandon Humanity and Rick Salutin’s The hour of anthropology may have struck in The Toronto Star.

2013 featured the hubbub of Napoleon Chagnon’s Noble Savages. Trouillot had urged us to attack the Savage Slot. “Anthropology must adapt to a world where none of us can take refuge in the illusion that we have found the uncontaminated Savage, the bearer of that pristine culture supposedly untouched by its Western alter-ego” (Trouillot 2003, 5). (Unfortunately, see my 2016 assessment of Anthropology’s Unfinished Revolution for how this message was diluted in anthropology textbooks.)

Here again, another connection to Ingold’s Being Alive. We must see life as process and relation:

[It is my ambition] to replace the end-directed or teleonomic conception of the life-process with a recognition of life’s capacity continually to overtake the destinations that are thrown up in its course. It is of the essence of life that it does not begin here or end there, or connect a point of origin with a final destination, but rather that it keeps on going, finding a way through the myriad of things that form, persist and break up in its currents. (Ingold 2012, 3-4)

'Ultimately, anthropology will only matter to the populations that we study and to most of our readers if it evokes a purpose outside of itself' (Trouillot 2003, 5)Click To Tweet
On this point, Gina Athena Ulysse did a great 2013 series in the Huffington Post on Why Anthropology Still Matters. Ulysse featured Paul Stoller, Arlene Torres, and Faye Harrison.

To cite: Antrosio, Jason. 2013. “Purpose of Anthropology: Must Evoke a Purpose Outside of Itself.” Living Anthropologically website, https://www.livinganthropologically.com/purpose-of-anthropology/. First posted 4 September 2013. Revised 25 April 2021.