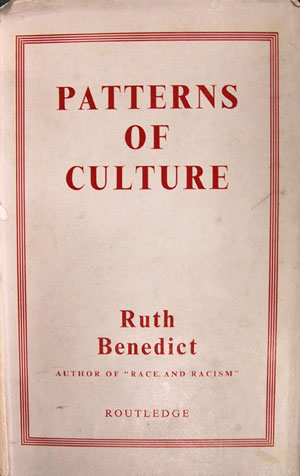 Franz Boas is commonly acknowledged as a founding figure in US academic anthropology. But it was his student Ruth Benedict who introduced the US brand of Boasian Anthropology to the world via the 1934 best-seller, Patterns of Culture. From the very first chapter, “The Science of Custom” and the first page, “anthropology is the study of human beings as creatures of society,” the introduction by Boas himself, and then a 1958 preface by Margaret Mead, Patterns of Culture was meant to be the book about the concept of culture. As Zoë Burkholder notes in Franz Boas and Anti-Racist Education, Boas was “a famously obtuse writer” and later “asked Benedict to translate his ideas on race and culture for popular audiences” (2006:24) for a pamphlet The Races of Mankind (written with Gene Weltfish). Ruth Benedict was a crucial conduit of Boasian anthropology for popular consumption. (For a different perspective on Boas as writer, see the Jonathan Marks comment below.)

As Michel-Rolph Trouillot writes in Anthropology and the Savage Slot, anthropology “inherited a field of significance that preceded its formalization” (2003:9). Accounts of others, and the use of stories about the Savage, became an argument within an emergent West on the possibilities of utopia against the necessity of order. “Just as the Savage is a metaphorical argument for or against utopia, so is utopia (and the Savage it encompasses) a metaphorical argument for or against order, conceived of as an expression of legitimate universality” (2003:22).

By the time of Boas and Benedict, arguments about others had already been ongoing for hundreds of years. “Now as before, the Savage is only evidence within a debate, the importance of which surpasses not only his understanding but his very existence. Just as utopia itself can be offered as a promise or as a dangerous illusion, the Savage can be noble, wise, barbaric, victim, or aggressor, depending on the debate and on the aims of the interlocutors” (2003:22-23; see also Anthropology and Human Nature).

Boas and Benedict also stepped into a world that had been deeply transformed, not just by peoples in constant interaction, contact, and trade, but by the direct and indirect effects of several hundred years of colonization:

Eurocentric ideas first developed and nurtured successively by the Renaissance, the first wave of colonialism, the Enlightenment, and the practice of plantation slavery in the Americas, had gathered new momentum with colonialism’s second wave. By the time the social sciences were standardized in degree-granting departments, non-Western areas and peoples were thought to be fundamentally different both in essence and in practice. (Trouillot 2003:19; Update 2017: see Anthropology’s Unfinished Revolution for a plea to current anthropology textbooks to understand the first wave of colonialism)

By the time of Boas and Benedict, colonialism was in its second wave. Most peoples had been deeply modified by previous engagements, even if only as a spin-off effect from direct colonization. Additionally, ideas of others had shifted more toward absence and negation. “Colonization became a mission, and the Savage became absence and negation” (Trouillot 2003:22).

The common explanatory devices for what others were like illustrated this absence and negation. The Savage could be explained through crude environmental or geographic determinism, or as a racial determinism, newly buttressed by the idea of each race located in evolutionary hierarchy. Boas and Benedict hoped the concept of culture would counter these forms of determinism.

Ruth Benedict on Race, Environment, & the Concept of Culture

The primary message of Patterns of Culture is the paramount importance of learned behavior in human existence. In contrast to prevalent notions of racial or biological determinism, or of human life as determined by the surrounding physical environment, or of humans confined by their place on an evolutionary hierarchy, Ruth Benedict posits that culture provides the patterning.

Benedict’s first chapter, “The Science of Custom” is beautifully written and crystal clear:

No man ever looks at the world with pristine eyes. He sees it edited by a definite set of customs and institutions and ways of thinking. Even in his philosophical probings he cannot go behind these stereotypes; his very concepts of the true and the false will still have reference to his particular traditional customs. John Dewey has said in all seriousness that the part played by custom in shaping the behavior of the individual as over against any way in which he can affect traditional custom, is as the proportion of the total vocabulary of his mother tongue over against those words of his own baby talk that are taken up into the vernacular of his family. (1934:2)

On the issue of race, or ideas of biological determinism, Benedict is succinct: “Not one item of his tribal social organization, of his language, of his local religion, is carried in his germ-cell. . . . Man is not committed in detail by his biological constitution to any particular variety of behavior. . . . Culture is not a biologically transmitted complex” (1934:12,14).


The primary message of Patterns of Culture is the paramount importance of learned behavior in human existence.Click To Tweet
On the question of how much human behavior was influenced or determined by the physical environment, Benedict is likewise brief but potent: “The institutions that human cultures build up upon the hints presented by the environment or by man’s physical necessities do not keep as close to the original impulse as we easily imagine. These hints are, in reality, mere rough sketches, a list of bare facts. They are pin-point potentialities, and the elaboration that takes place around them is dictated by many alien considerations” (1934:35).

In short, Benedict endorses and popularizes what Michel-Rolph Trouillot terms the “Boasian conceptual kernel” of US anthropology:

Or for a February 2018 re-statement through the eyes of anthropologist Alfred Louis Kroeber, mentored by Franz Boas and a contemporary of Ruth Benedict, see How Ursula Le Guin’s Writing Was Shaped by Anthropology in Sapiens: “Kroeber described culture as ‘superorganic.’ According to this idea, the ‘civilizational achievements’ of any group of people weren’t passed down biologically and could only be taught. If we’re deprived of our access to human instruction–books, guides, teachers–we won’t know how to build buildings, write poetry, and compose music.”

Ruth Benedict: What Can We Learn from Primitive Societies?

Although her language can be dated, Benedict begs us to break out of the prism of white culture and parochial thinking. While she may be using words like primitive, it is a call for cultural relativism:

The psychological consequences of this spread of white culture have been out of all proportion to the materialistic. This world-wide cultural diffusion has protected us as man had never been protected before from having to take seriously the civilizations of other peoples; it has given our culture a massive universality that we have long ceased to account for historically, and which we read off rather as necessary and inevitable. We interpret our dependence, in our civilization, upon economic competition, as proof that this is the prime motivation that human nature can rely upon, or we read off the behaviour of small children as it is moulded in our civilization and recorded in child clinics, as child psychology or the way in which the young human animal is bound to behave. It is the same whether it is a question of our ethics or of our family organization. It is the inevitability of each familiar motivation that we defend, attempting always to identify our own local ways of behaving with Behaviour, or our own socialized habits with Human Nature. (1934:6-7)

In other places, Benedict’s words from 1934 remain as fresh and important as ever, perhaps accounting for the re-publication of Patterns of Culture in 1989 and 2005:

Modern existence has thrown many civilizations into close contact, and at the moment the overwhelming response to this situation is nationalism and racial snobbery. There has never been a time when civilization stood more in need of individuals who are genuinely culture-conscious, who can see objectively the socially conditioned behaviour of other peoples without fear and recrimination. (1934:10-11)

Moreover, Benedict provides a counterpoint to all the outrage that minor changes in custom will wreak social havoc:

Our fears over even very minor shifts in custom are usually quite beside the point. Civilizations might change far more radically than any human authority has ever had the will or the imagination to change them, and still be completely workable. The minor changes that occasion so much denunciation today, such as the increase of divorce, the growing secularization in our cities, the prevalence of the petting party, and many more, could be taken up quite readily into a slightly different pattern of culture. Becoming traditional, they would be given the same richness of content, the same importance and value, that the older patterns had in other generations. (1934:36-37; see also Jon Marks on Facebook for how this section echoes Bronislaw Malinowski’s 1930 essay on Parenthood)

Benedict makes a brilliant case for cultural patterning and for cultural relativism. But she also lends credence to a template that would consider each separate group as a kind of laboratory:

With the vast network of historical contact which has spread the great civilizations over tremendous areas, primitive cultures are now the one source to which we can turn. They are a laboratory in which we may study the diversity of human institutions. With their comparative isolation, many primitive regions have had centuries in which to elaborate the cultural themes they have made their own. They provide ready to our hand the necessary information concerning the possible great variations in human adjustments, and a critical examination of them is essential for any understanding of cultural processes. It is the only laboratory of social forms that we have or shall have. (1934:17)

In so doing, Benedict minimized and played down not just western colonialism, but the degree to which all peoples had been forged through interaction, contact, and trade. (For more, see Eric Wolf, Europe and the People Without History for an alternative reading, and the follow-up Globalization Stories: Systematic Erasure of Continuous Encounters.)

For Benedict, the concept of culture in the abstract, as a shaping idea for all human activity, slid easily and necessarily into an investigation of cultures as a noun-form plural. “Anthropologists are turning from the study of primitive culture to that of primitive cultures, and the implications of this change from the singular to the plural are only just beginning to be evident” (1934:50). Certainly this could be seen as progress, in the sense of no longer investigating all others as if they were one and the same: the savage is the savage is the savage. However, in making this turn, Benedict would also (perhaps more than Boas) turn to consider each as a separate whole. “Anthropological work has been overwhelmingly devoted to the analysis of culture traits, however, rather than to the study of cultures as articulated wholes” (1934:48).

And that’s one place–before we even reach Ruth Benedict’s analysis of The Pueblos of New Mexico, Dobu, and The Northwest Coast of America–where the difficulties begin. The idea that others were self-contained laboratories would underlay an idea of what anthropologists could accomplish that persists into Jared Diamond’s The World Until Yesterday. (See the earlier Patterns of Culture: From Culture to cultures for similar material written as satiric counterpoint to Diamond; see also Jared Diamond and Future Public Anthropology for an overview of scholarship on Diamond-Mead.)

Instead, at least for many readers, it seems that Ruth Benedict’s concept of culture contains the seeds of how culture starts looking like race.


Anthropology must make an explicit attack on the Savage slot & the premises of its symbolic order.Click To Tweet