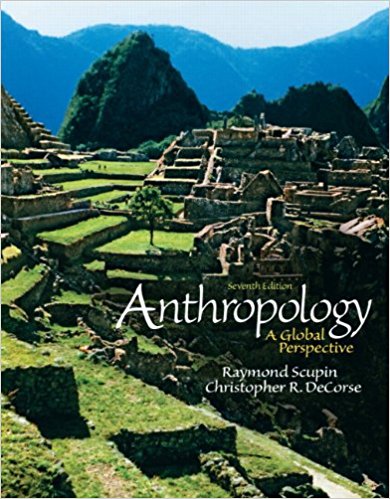 Update: This post from 2011 was a review of the four-fields textbook Scupin and Decorse Anthropology (7th edition). The textbook emerged with a 9th edition in January 2020, which may be worth looking at, but will probably be immediately seen as impossibly dated, describing a world just before the coronavirus pandemic. For my current approach, I use Anthropology: What does it mean to be human? as an Introduction to Anthropology.

The 7th edition of Scupin and Decorse Anthropology was a major upgrade to the 6th edition. Starting with the 7th edition, Scupin & Decorese included full-color photographs and diagrams, with a much more inviting format. The research and writing are generally solid and the authors have real four-fields experience. It was rather expensive at the outset, but then prices became comparable to other comprehensive four-field textbooks.

In the preface, Scupin and Decorse Anthropology declares the first two unifying themes are “the diversity of human societies and cultural patterns the world over and the similarities that make all humans fundamentally alike” (p. xiv). It is unclear what position this means Scupin and Decorse Anthropology will adopt, but on p.226 the authors appear to positively endorse Donald E. Brown’s Human Universals (1991). They will then relate Donald Brown to a positive assessment of evolutionary psychology and The Adapted Mind

(1992), saying “the field of evolutionary psychology is in its infancy and will most likely grow to offer another interactionist perspective on human thought and behavior” (248). See the blog-post Darwin in Mind–-The End of Evolutionary Psychology for Anthropology for a very different assessment!

Scupin and Decorse Anthropology does not spend much time on infant development or maternal environment, but there is a brief mention of Meredith Small’s work in Our Babies, Ourselves (1998) and Kids: How Biology and Culture Shape the Way We Raise Young Children (2001). Their one quote is crucial: “Small emphasizes that biology intersects with culture in infant and child development, but that we are neurologically ‘unfinished’ and brain growth is inextricably connected with social and cultural devlopment” (236). I use Small’s Our Babies, Ourselves article from Applying Anthropology to emphasize the same point, and it would be nice to see further elaboration or an earlier mention in the textbook.

Like many anthropology textbooks, Scupin and DeCorse Anthropology saves the discussion of contemporary race and ethnicity for the late chapter 23. Although they include a section on “The Cultural and Social Significance of Race” (517), they do not here discuss social inequality–this is briefly discussed later in the chapter once the terms have shifted to “Ethnicity” and one paragraph on “African Americans Today.” Better organization of this chapter could make this much clearer.

Although Scupin and Decorse Anthropology does not specifically talk about Boas’s immigrant head shape studies, the authors mention Boas’s work on the subject in two places, during a discussion of historical particularism (285) and in the “Race and Ethnicity” chapter:

Boas and his students took precise assessments of the physical characteristics of different populations, including cranial capacity and brain size. His research began to challenge the scientific racist views, demonstrating conclusively that the brain sizes and cranial capacities of modern humans differ widely within all so-called races. This anthropological research resulted in irrefutable findings that there were no “superior” or “inferior” races. Boas’s research also confirmed that there were no direct links among race, brain size, cranial capacity, and intelligence levels. (517)

Certainly interesing to read those lines in the light of the 2011 reassessment of Gould (see blog-post Mismeasuring Gould in “The Mismeasure of Science”). Scupin and Decorse Anthropology does not discuss present craniometrics.

In chapter 23 on “Race and Ethnicity,” Scupin and Decorse Anthropology discusses how “a number of groups such as the Pioneer Fund persist in supporting research that purports to demonstrate scientifically that races differ in their brain size, mental abilities, and intelligence” and the authors note how “anthropologists are actively criticizing these erroneous views with sound, scientifically based research” (p.517). They here cite a 2011 chapter by Lieberman and Scupin in Race and Ethnicity: The United States and the World (2nd Edition). However, they portray this as a “persistence” rather than a revival–they do not discuss A Family Tree in Every Gene (Leroi 2005) or race-based medicine. Scupin and DeCorse-Anthropology does include a box on “Race and Genetics: The Human Genome Project” (136-137), but does not discuss how such groupings have been used to re-assert the validity of race.

Scupin and DeCorse Anthropology debunks race in chapter 6 on “Human Variation.” They begin with a catalog of all kinds of human variation and then proceed to note how it does not sort along typical race-classification lines. They have some good contemporary references, such as Human skin pigmentation as an adaptation to UV radiation (Jablonski and Chaplin 2010) on skin color. However, their primary evidence for debunking are still the ideas of clines and the research from Lewontin (1972). Scupin and Decorse Anthropology does not discuss evidence and race identification from forensic anthropology. Forensic anthropology emerges in a later section on applied anthropology (566-569).

In the “Human Variation” chapter, Scupin and Decorse Anthropology includes a short section on how “culture also influences human–and sometimes genetic–variation” and how laws prohibiting interracial marriages can “inhibit gene flow and contribute to genetic drift within a population” (129). They then discuss “the impact of modern urban life” including lower birth weight babies around Love Canal. Although the Love Canal reference may be dated for contemporary students, it would seem like a perfect place to discuss how social notions of race can become biology and environmental racism. Scupin and DeCorse Anthropology does not entirely close the loop here, but they do put the pieces close enough for readers to do the rest. They discuss The Bell Curve and intelligence (135), and although Scupin and Decorse Anthropology does not connect it to a race revival, the authors convincingly debunk such arguments using some contemporary citations such as Stephen Molnar’s Human Variation: Races, Types, and Ethnic Groups (6th Edition). As mentioned above, Scupin and Decorse Anthropology does not connect to possible biocultural arguments when discussing IQ.

Chapter 4 on “The Primates” discusses primate diversity and “the increasing sense that nonhuman primate species possess what some might recognize as the rudiments of human ‘culture'” (87). Despite recognizing the “very wide range of behavior” (87), Scupin and Decorse Anthropology proceeds to emphasize commonalities, including dominance hierarchies. They discuss the Goodall incidents of violence and aggression without any mention of the changes brought about by human food provisioning and habitat reduction. Although they cite Meredith Small Female Choices: Sexual Behavior of Female Primates (1993) on bonobos, there is very little on how bonobo behavior could challenge the stereotypes based on chimpanzee observations. In general the chapter does not address the most common stereotypes of violence, aggression and dominance as programmed into primates.

Scupin and Decorse Anthropology has a good discussion of bipedalism, noting from the outset how “fossil remains of the oldest known hominids indicate that these creatures walked as well as modern humans” (95) and that there are “seeming disadvantages” (96) to bipedalism. They emphasize the need for a “confluence of factors” (96), but favor a thermoregulation model that incorporates persistence hunting:

With our steady pace, humans can out distance almost all other mammals over long distances particularly when it is hot. Indeed, it has been noted that the modern San people of southern Africa sometimes employ persistence hunting; literally chasing animals until they collapse. (97)

They cite Persistence Hunting by Modern Hunter Gatherers (Liebenberg 2006) and The evolution of endurance running and the tyranny of ethnography (Lieberman et al. 2007). It is an argument I find quite compelling–if only because it links to my childhood in Montana, where one legendary hunter used persistence hunting for deer and elk.

Scupin and Decorse Anthropology does not discuss bipedalism as a learned behavior or as styles of walking.

Chapter 7 on “Paleolithic Cultures” has some nice discussions of stone tool manufacture and details on stone tool use, but Scupin and Decorse Anthropology does not treat this as a coevolution.

Scupin and Decorse Anthropology discusses the challenges of species determination for fossils, noting how “chimps from Tanzania’s Gombe National Park display an astonishing degree of variation in size and skeletal structure” (108). The authors also emphasize how recent discoveries make “the hominid family tree look increasingly bush-like” (110). In seeking to correct “the image of Neandertals as brutish creature,” Scupin and DeCorse state “the large Neandertal cranial capacity ranged from 1,200 to 2,000 cc and could accommodate a brain as large as, or even larger than, that of a modern human. Moreover, studies of Neandertal endocasts indicate that the structure and intellectual capacities of the Neandertal brain mirrored those of modern humans” (116).

Scupin and DeCorse have reworked this section, beginning with the “replacement model” (113), then the “multiregional evolutionary model” (114) and then the “hybridization and assimilation models” (114) which they now seem to favor. They still mischaracterize the multiregional model, saying “variations of this model initially proposed in the 1940s, suggested the parallel evolution of H. sapiens in different regions” (114). Certainly some people were proposing parallel evolution, but in Weidenreich’s 1940s model of multiregional evolution, it is an interconnected trellis. Their diagram of the multiregional model (113) remains terrible, basically a candelabra with two gene flow arrows, and they have made the other model diagrams into candelabras as well, just with later dates. The additional diagram of a hybridization and assimilation model, with much more gene flow depicted, is better, but still falls short of a Weidenreich trellis. They continue to note the work of The “Eve” Hypotheses: A Genetic Critique and Reanalysis (Templeton 1993) and Out of Africa again and again (Templeton 2002), but these references could have been updated for this edition.

Scupin and DeCorse are not biological determinists, but as discussed in section 1.1 they do approve of some material in human universals and evolutionary psychology.