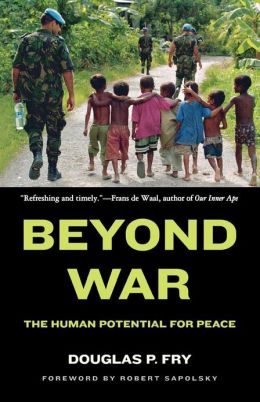 Update 2017: On 5 November 2017, the New York Times Editorial Board wrote that “It’s Not Too Soon to Debate Gun Control.” However, this is wishful thinking. The current US President and most of Congress parrot the ideological claptrap I describe as “shoddy anthropology.” The situation is even worse than it was after Newtown in December 2012. Unless and until the current Republican majorities are soundly defeated, there will be zero movement on gun control legislation.

In a December 2012 round-up on Gun Violence and Anthropology, I wrote that “some of the most classic arguments against gun control are rooted in shoddy anthropology–ideas about human nature, culture, and history which do not withstand anthropological scrutiny.” Daniel Lende, who has written sensitively on Newtown and Violence – No Easy Answers, sent me an e-mail for clarification.

Lende’s e-mail reminded me of how news of Jared Diamond’s book, The World Until Yesterday coincided with the horrifying scenes from Newtown. Somehow Jared Diamond seemed to be telling us that really the violence in Papua New Guinea was much worse than what we were grieving in Newtown. My own review of Diamond turned to his shoddy use of the ethnographic record, particularly the uncritical use of Napoleon Chagnon. This issue would be redoubled with the release of Chagnon’s Noble Savages memoir. These accounts feed into reflections on gun violence and gun control in the United States. They binge on the shoddy anthropology that underpins current debates.


Arguments against gun control often turn on a shoddy anthropology of ideas about human nature.Click To Tweet

Arguments against gun control often turn on a shoddy anthropology of ideas about human nature. In this myth, humans have been killing each other since time immemorial. If it’s not sticks, it’s stones, then it’s slings, then bows & arrows, spears, leading up to swords and muskets. Violence is primordial to human nature. Gun control can’t control evil. Gun control just makes it easier for bad human nature to manifest. For a 2017 treatment of these themes, see Biological Anthropologist Patrick Clarkin’s A (R)evolution of Tenderness.

Before writing about Jared Diamond on Napoleon Chagnon, I had not realized how pervasively resuscitated this mythology had become, mostly via Steven Pinker’s Better Angels of our Nature (2011). But as angry comment streams everywhere indicate, the Pinker-Diamond-Chagnon triangle is now firmly entrenched. The 2013 book, War, Peace, and Human Nature: The Convergence of Evolutionary and Cultural Views, provides an empirical and theoretical corrective. But even though anthropology has a much different perspective, plus the empirical evidence and science on our side, this is difficult ideological ground to recapture. Douglas Fry’s previous work, Beyond War: The Human Potential for Peace, just sounds too hippy.

Closely linked to this view is another argument against gun control which posits that there are good and evil individuals in the world. In this view, the people who are going to do evil will find a way to do evil, whether that be from drunk driving or making bombs out of fertilizer. From such a standpoint, any legislation is simply an ineffective overlay on top of a society composed of rugged autonomous individuals. Individuals can be changed from within, but they are never changed through legislation.

The first founding statements of anthropology effectively demolished such ideas about the relationship between human nature, cultural patterning, individuals, law, and society. The efforts of Franz Boas and Ruth Benedict’s Patterns of Culture tackled these issues from the 1930s and before. These are the founding ideas of anthropology. It’s a far cry from contemporary caricatures portraying Napoleon Chagnon as the natural scientist battling the 1970s rise of Marxists, feminists, and post-modernists.

When the argument against gun control turns away from human nature, it often focuses on ideas of culture, particularly on a “culture of violence.” It’s a very curious turn. This so-called culture of violence, when it does not simply correspond to older caricatures of a “culture of poverty,” usually talks a lot about video games, Hollywood, and The Media, all of which glorify violence. It’s both a very symbolic use of the word culture, but also a very deterministic vision. Somehow these video games are leading to violent episodes, despite repeated rebuttals that the same video games in Japan don’t seem to be doing anything.


Beware deterministic versions of 'culture' that ignore power & political economy.Click To Tweet
This is a deterministic version of culture that ignores power and political economy. Curiously, there is usually no mention of the gun advertising which liberals highlight. But there is also no mention of what Charles Blow called Gun Culture. Defending Blow’s use of the term gun culture was one of the big reasons I became involved in writing about gun control. Blow used culture in a non-deterministic way. He was not seeking a shortcut to evade explanations of power, political economy, and history (e.g. David Brooks is a Cultural Problem).

Finally, and very briefly because it has been done much better elsewhere, arguments against gun control often depend on shoddy history. This shoddy history assumes statements about militias and muskets in the 18th century are to be read as a guiding package of inalienable rights to massive firepower in the 21st century.

While I have not expected the American Anthropological Association to be able to issue a unified statement about gun control, it is nevertheless the case that many gun control arguments depend on assumptions about human nature, culture, and history that have long been demolished by anthropology since its beginnings a century ago. I am pleased that the AAA did issue a January 2013 Statement on Gun Violence:

We call upon the Congress and the Administration to rescind measures that obstruct the development of empirical knowledge about guns and public safety. Further, we call on the Congress and the Administration to make additional federal funds available, as an urgent national priority, for rigorous peer-reviewed research by experts from diverse disciplinary backgrounds to investigate ways of reducing the tragic loss of life in incidents involving guns.

This post is part of a series about the need for anthropology to directly address gun control and gun violence. The series includes: