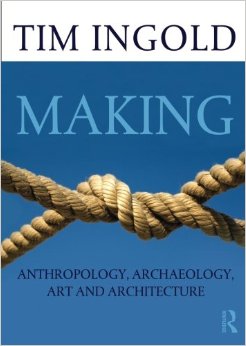 Update: These thoughts on teaching cultural anthropology are from 2014. For more current versions see the page on Anthropology Courses.

This semester I am repeating the insane idea from last fall of using Michel-Rolph Trouillot’s Global Transformations: Anthropology and the Modern World as an overarching textbook. Last fall I tried assigning the highly-recommended Coding Freedom: The Ethics and Aesthetics of Hacking from Gabriella Coleman. However, I found Coleman’s recourse to depicting a “hacker culture” somewhat at odds with the reasons for why Trouillot said we needed to bid Adieu, Culture.

So this time I swapped that book for Tim Ingold’s Making: Anthropology, Archaeology, Art and Architecture, which does certainly provide an inspiring quote for teaching anthropology:

My teaching–all teaching–would be worthless were it not transformational in intent. And conversely, my studies–all study–would be worthless if it did not lead us to teach with this intent. To teach is to honour our commitments by repaying what we owe the world for our formation. In short, teaching (and not ethnographic writing) is the other side of participant observation: there cannot be one without the other, and both are indispensable to the practice of anthropology as an art of inquiry. To teach anthropology is to practise anthropology; to practise anthropology is to teach it. (2013:13; see also Dustin Wax’s The Trouble with Teaching on Savage Minds)

Teaching Cultural Anthropology: Does it work?

For this fall’s teaching cultural anthropology, I have retained a trio of books I’ve been using for several years: Ruth Benedict’s Patterns of Culture, Laura Bohannan’s Return to Laughter and Elizabeth Chin’s Purchasing Power: Black Kids and American Consumer Culture.

This time around I’m trying to see if teaching cultural anthropology “works” by juxtaposing those books against selections from three recent offerings. First, I’m including a chapter from Jared Diamond’s Natural Experiments of History, as both Benedict and Diamond spend a lot of time talking about islands. In some ways–as I mentioned in Jared Diamond and Future Public Anthropology–I suspect this book is where Diamond gets much more historical and belatedly realizes one cannot do geography without history, especially colonial history.

Second, I’ll be juxtaposing Bohannan’s Return to Laughter with a selection from Nicholas Wade’s Troublesome Inheritance. Anthropologists have vigorously and correctly argued against Wade’s Troublesome Ignorance when it comes to race and genetics (for a longer history of this critique see Boasian Critiques of Race in The Nation edited by Alex Golub and Angela Chen). However, by juxtaposing Bohannan with one of Wade’s later speculative chapters, “The Rise of the West,” I’ll be interested to explore how some of the earlier anthropological tropes precisely reinforced the ideas of African “tribal” organization.

The final juxtaposition is Chin’s Purchasing Power against a selection from Amy Chua and Jed Rubenfeld on The Triple Package. Here, I hope the comparison is sharp–Chin provides an account of history, inequality, and power, of the kind anthropology should be delivering all the time (see editor Anne Brackenbury’s recent post on Going Public. Still, the frames Chin is fighting against are powerful organizing ideas–as with all these juxtapositions, I’m not sure teaching cultural anthropology always works.

To kick off the class, I’ve taken a look back at September 2013 and the Trouillot quotes I extracted for reflecting on the purpose of anthropology. I’m hoping to be able to re-investigate those blog-posts, since participating in liberal arts college planning activities sidelined blogging. Hoping also to finally work on the stable pages for Cultural Anthropology and Living Anthropologically. Because if blogging might also be a form of teaching anthropology, then (to paraphrase Tim Ingold) blogging is also the other side of participant observation.