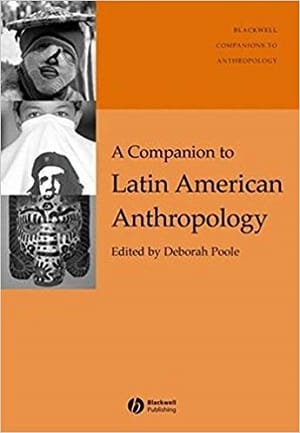 These posts are all cataloged in the Latin America index tag for the site, which also includes related blog-posts such as a query on how to write an introductory anthropology textbook for undergraduates in Brazil.

Up until the 2016 version of this course, I taught with the first edition of the Harry Sanabria textbook Anthropology of Latin America and the Caribbean. However, the Sanabria textbook (originally published in 2005) was too dated to teach in 2019 and so I adopted a different approach for this course.

What this did give me an opportunity to do was to revisit what I had originally wanted to use as my textbook back in 2012, Deborah Poole’s edited A Companion to Latin American Anthropology. In 2012, Poole’s edited volume was only available as a very expensive hardcover. Later, the price came into an acceptable range. Poole’s edited volume is definitely a unique resource, but it is also a product of its time. In retrospect, I was actually crazy to attempt to teach it as a textbook for undergraduates, but I did not have any other textbook options. I tried my best, and students also rose to the occasion.

Books for teaching the Caribbean historically

Over the years I’ve rotated a number of books through teaching Latin America. Since the Poole Companion was basically a reader that opened onto other materials, I limited the books to two that worked well. I still like Matthew Restall’s Seven Myths of the Spanish Conquest (see this extended 2013 blog-post on Indigenous Allies and the Politics of Empire). I remain annoyed that Restall sees his revisionist history as allied to Jared Diamond’s Guns, Germs, and Steel, as Restall’s work thoroughly up-ends Diamond’s deterministic account. Nevertheless, Restall’s main points remain useful.

When I opened this up for comments, on Facebook got some great feedback from Rodrigo Bandelj Ruiz:

There are plenty of resources that you could possibly include and many local anthropologists that you might wanna look at. For instance, for understanding not only the anthropological work in Latin America but the historical reality a recommendable work is that of Everyday Forms of State Formation: Revolution and the Negotiation of Rule in Modern Mexico. Pablo Gonzales Casanova and his Internal Colonialism. Bonfil Batalla and his Mexico Profundo. Also, Lins Ribeiro is a really good source when looking at Brazil as well as Darcy Ribeiro. In Bolivia, Silvia Ribera for feminist scholarship.

There is a really good book (philosophy) but essentially good for anthropologist trying to understand modernity in Latin American context, that is Bolívar Echeverria: La modernidad de lo Barroco. However as it is in Spanish there is a text in English written by one of Bolívar’s friends, Critical Marxism in Mexico by Stefan Gandler. This last book will work very well in understanding Latin America. Also, Marcello Carmagnani and his The Other West, as well as almost any book of Angel Palerm or Serge Grusinzki. There are many others, but Spanish is the main language. I hope those can be useful as sometimes it is good to make a text compilation for class rather than a book which comprises some articles. I am glad to help colleagues trying to understand the place I am from.

For an available online syllabus, I found useful this Winter 2018: Anthropology of Latin America course by Professor Nancy Postero. Postero is the author of the 2017 The Indigenous State: Race, Politics, and Performance in Plurinational Bolivia. Also helpful was the May 2015 Latin America: People, Places, and Power by Professor Nia Parson. Parson is the author of the 2013 Traumatic States: Gendered Violence, Suffering and Care in Chile.

From Twitter, Valentina Pellegrino wrote: “Alcida Rita Ramos! Her take on indigenism is impressive, Fernando Coronil and Luis Guillermo Vasco to understand activist anthropology.” Alcida Rita Ramos does appear in the Companion to Latin American Anthropology with a chapter titled “Disengaging Anthropology.” This blog has collected some tributes to the late Fernando Coronil. I tried to incorporate work by Luis Guillermo Vasco when we read “Colombia: Citizens and Anthropologists” by Myriam Jimeno in the Companion.