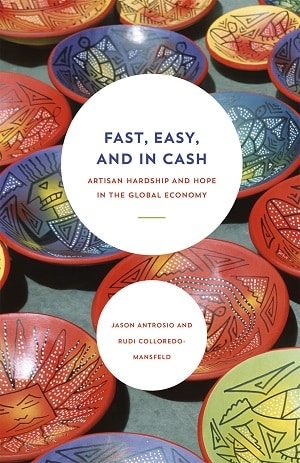 Teaching Latin America and Caribbean anthropology as a “Peoples and Cultures of […]” course is always a daunting task. This post considers my attempt to teach Latin America 2016, the first and only time I assigned my co-authored book Fast, Easy, and In Cash: Artisan Hardship and Hope in the Global Economy. For an update, see Latin America & Caribbean Anthropology 2021 and this YouTube lecture playlist:

Rather than try to cover material as if people live within the determining container of culture, my objective in Latin America 2016 was to understand common themes and variations in processes occurring across the interconnected Americas. Some of these themes included:

I began with the final and most recent theme of local economies in globalization. I was excited to teach my co-authored book, Fast, Easy, and In Cash: Artisan Hardship and Hope in the Global Economy. In some ways, this echoed my own experience studying and traveling to Latin America, becoming fascinated and intrigued with contemporary issues, and from there wanting to fill in the historical context. The students seemed to be receptive to the book, but this was the one and only time I have taught it. I naively believed the book would sell well and help people understand local economies. Alas.

For filling in the historical context, I turned to Matthew Restall’s Seven Myths of the Spanish Conquest. I still wish Restall had more directly confronted the Jared Diamond version of the conquest, see Indigenous Allies & Politics of Empire, but Restall’s insights remain revelatory regarding the Age of Conquest.

For insights into colonialism and the Caribbean, I used Sidney Mintz’s Three Ancient Colonies: Caribbean Themes and Variations. Mintz’s book was definitely in reflective mode. It helped to underscore the power of combining anthropological fieldwork with historical studies, and the dedication of the researcher to the region and people. Three Ancient Colonies also underscored the critical importance of the Caribbean in the creation of the West and to the contemporary episodes of what we call globalization. Then in 2015 Sidney Mintz passed away, just when I was pondering how I would use his Three Ancient Colonies for this course. Teaching this course became particularly poignant.

For this time teaching Latin America, I concluded the course with Remapping Bolivia: Resources, Territory, and Indigeneity in a Plurinational State. By using this collection of essays, edited by Nicole Fabricant and Bret Gustafson, I aimed to explore what is one of South America’s most interesting and paradoxical countries. Another important aspect of this edited volume was that Fabricant and Gustafson included the voices of Bolivian activists and scholars–a practice that I wish I had done more to follow in the rest of the course.

The main textbook for the course was Harry Sanabria’s Anthropology of Latin America and the Caribbean. After scouring for other possibilities, it seemed like the Sanabria textbook was really the only current option, making it a unique resource. In summer 2015 I wrote a brief review of the textbook for a second edition which then finally became available in Latin America & Caribbean Anthropology 2021.

This post is linked to the Student Projects and is part of a series about teaching the anthropology of Latin America and the Caribbean. The series includes: