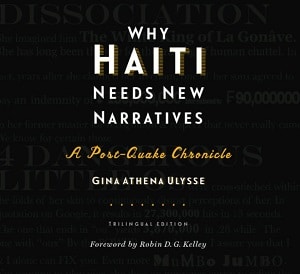 Update: For a glimpse at Gina Athena Ulysse’s efforts at transformational storytelling, see her 2017 book Because When God Is Too Busy: Haiti, me & THE WORLD as well as her 2019 Homage to Those Who Hollered before Me/Meditations on Inheritances and Lineages, Anthropological and Otherwise in Anthropology News. Also see the readings in Lorena Gibson’s Anthropology for Liberation course.

This is a modified transcript of discussant comments for a panel on Anthropology and Storytelling at the 2014 Annual Meetings of the American Anthropological Association. Many thanks to Coralynn Davis, Carole McGranahan, Gina Athena Ulysse, and fellow discussant the late Mary Steedly. Sorry to miss John Collins, but I attempted in my remarks to fulfill his paper title and “clear a room (of anthropologists).”

Stories that must be told

In 2003, Michel-Rolph Trouillot wrote that anthropology’s relevance depended on the degree to which we could spell out the stakes for a wider audience, rather than basking in “the aestheticization of theory” and “spinning in a proselytical circle” (2003, 137). Paul Stoller spells out a similar agenda in Welcome to the Anthropocene:


Enter anthropology and anthropologists. Most of my anthropological colleagues have been passive rather than active players on the sociopolitical stage. In our discipline the institution has long celebrated arcane theoretical contributions for which practitioners receive research grants and endowed chairs. These times require a shift in emphasis. Given the political, social and ecological crisis we face, anthropologists are uniquely positioned to demonstrate in clear and concise language and image, how market fundamentalism, which generates climate change, social inequality, racism and the defamation of difference, has brought us to the social precipice. By moving from passive to active voice anthropologists, among other cultural critics, can provide the insightful information needed to construct a groundswell of change–a course correction on a path to social apocalypse.

Spelling out those stakes does require, as Trouillot put it, identifying the ultimate listeners, the people in power who most need the message of anthropology. This storytelling must make the “hegemonic hear” (a phrase from Margaret Mills via Davis 2014, 35) new and different narratives.

Such storytelling would pay close attention to the native competency of interpretation (from Kirin Narayan via Davis 2014, 25), which may lean somewhat against a Geertzian view of anthropologists as reading over the shoulders of the natives. Instead this allows natives themselves to jump into the discussion–not as data, not as local color, but as real storytelling interlocutors. These are the stories that must be told or tell themselves.

And so, anthropology is indeed theoretical storytelling, borrowing a phrase from Carole McGranahan, although I wonder if we actually need to claim the validation of the theoretical. Rather, drawing on Tim Ingold, anthropology is transformational storytelling. Anthropology is where the stories of descriptive ethnography become transformational in intent, for teaching, for writing, for an engagement which once again constantly moves and morph beyond bounds (Davis 2014, 23,27). Put differently, there may not be a need to argue for narrative occupying a central theoretical role in the discipline when we can argue for storytelling as inhabiting an irrepressible role in the ongoing human transformation that anthropology enjoins. This is exactly how McGranahan concludes: the stories are the point.

And hey, with Merriam-Webster declaring culture to be the #1 word of the year (should I just give up Trouillot’s notion of Adieu Culture and jump on the bandwagon?). Then there’s uber-blogger economist Tyler Cowen asking Are anthropologists better than you think? Are we in for the crush of the wider public, some Black Swan Anthropology?

But as McGranahan also says: “And yet.” And yet. Or as Trouillot said about spelling out anthropology’s relevance to a wider audience: “That will not be easy” (2003, 137). As I look over the scene at the end of 2014, can’t help thinking: Anthropology Is Over. We Lost. The discipline that built a legacy of attacking the myth of race, meant as a counterpoint to racism. And yet. 2014 brought us Nicholas Wade. As Paul Stoller says, we are Racing Away From Ferguson. Widening real inequalities while anthropology is still white public space.

Or as Brittney Cooper writes (via Gina Athena Ulysse): “If I have to begin by convincing you that Black Lives Matter, we have all already lost, haven’t we?” (I am utterly undone: My struggle with black rage and fear after Ferguson).

What to do with an American Anthropology, a discipline that cannot seem to prove to wider audiences that anthropology matters. While internally a notion that Black anthropologists matter (if that ever gets off the ground, although see the 2014 Sources on St. Clair Drake), seems eternally trumped by “all anthropologists matter.” Here channeling a tweet from @Arther_Affect via Ulysse:

WTF is the impulse behind changing #BlackLivesMatter to #AllLivesMatter. Do you crash strangers' funerals shouting I TOO HAVE FELT LOSS

Which in anthropological practice seems to mean all white French male theorists matter. [*see note below*]

So yes, let anthropology be transformational storytelling, but that leads us smack back into the middle of power:

Whose stories?
Who gets to tell them?
Who is listening?
Who can understand?

But what anthropology might be able to do as transformational storytelling is to bring the stories that no one else is willing to get:

The populations we traditionally study are often those most visibly affected by the ongoing polarization brought about by the new spatiality of the world economy. They descend directly from those who paid most heavily for the transformations of earlier times. . . . We are particularly well placed to document these effects on the lived experience of real people everywhere, but especially among those who happen to be the ones most disposable from the viewpoint of capital. The need to renew our topical interests is real, but it should not lead into the temptation to aestheticize the native or to study only natives that suddenly look like us. We cannot abandon the four-fifths of humanity [seen] as increasingly useless to the world economy, not only because we built a discipline on the backs of their ancestors but also because the tradition of that discipline has long claimed that the fate of no human group can be irrelevant to humankind. (Trouillot 2003, 138)

*Note on the Ontological Anthropocene, Political Economy, and Storytelling

The line about “all white French male theorists matter” was a dig at Bruno Latour, who basically headlined the 2013 American Anthropological Association meetings with the notion of the Ontological Turn, and then really did headline the keynote speech for 2014 Anthropology at the Time of the Anthropocene. When I wrote my comments, I expected more controversy, such as what Paul Stoller had written in 2013 regarding an ontological turn-off (see Narrative and the Future of the Social Sciences), or what one political economist at the 2013 meetings called “the struggle for the soul of the discipline.”

Strangely, in 2014 the anthropological anthropocene, the ontologists, and the political economists seemed to turn together, unexpectedly coalescing on shared political positions.

Update: It is interesting to look back on this possible 2014 coalescence in anthropology around themes like Black Lives Matter (see the 2020 comment below). It didn’t seem to work, at least if 2016-2020 is any guide, and my comments above that “Anthropology is over, we lost” were tragically fulfilled. For an attempt to reorient, see the Purpose of Living Anthropologically.