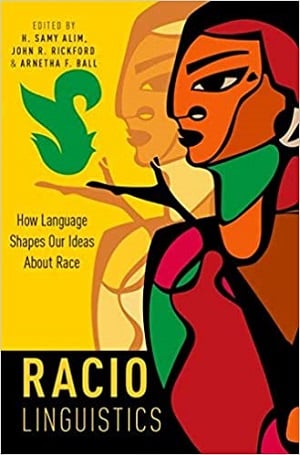 Using the textbook Anthropology: What does it mean to be human? for Intro to Anthropology 2021 after talking about Ethnographic Methods, we used “Shakespeare in the Bush” to transition into materials on language. The first part of class was an introductory primer, but we want to always consider how raciolinguistics or raciolinguistic ideologies shape our lives and ideas.

After this class we began the third unit with the chapter on Meaning. Recommended, from the book image: Raciolinguistics: How Language Shapes Our Ideas About Race


After the course was finished, got a question on YouTube about language ideology:

What would you say is the difference from language ideologies to language attitudes? and are they always connected to prescriptivism?

Thank you for the comment! This isn’t exactly my field, so hopefully others can chime in. My take would be that language attitudes are a range of opinions and feelings that people have, but aren’t necessarily codified into prescriptions. As Lavenda and Schultz write in their textbook Anthropology: What does it mean to be human?, language ideologies would tend to be the next level, that is a language attitude that becomes a norm, probably in the form of an ethnocentric hierarchy imposed upon speakers of another language or on certain types of speech within a language. My feeling is that prescriptivism is much more prevalent with language ideologies. It can occur with language attitudes, but it would be a more informal prescriptivism. This comment reminds me of another chapter in Lavenda and Schultz where they discuss naturalizing inequalities.

I am not sure if the comment could specifically address raciolinguistic ideologies, but that is would be one dimension of both language attitudes and language ideology.