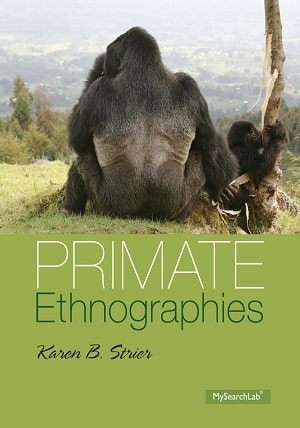 Using the Lavenda and Schultz textbook Anthropology: What does it mean to be human? we read about primate flexibility with two readings: Chapter 3, “What can the study of primates tell us?” and Barbara Smuts, “What are Friends For?”

This material was for Intro to Anthropology 2021. The previous class was on Evolution and the next class examined the first part of human evolution. In the next version of the course, I may use How apes reveal human history.

Why do we say “non-human primates”?

I consider the first four words of the chapter to be extremely important: “Human beings are primates” (Lavenda & Schultz:62). As Lavenda and Schultz explain, Linnaeus, working in the 18th-century and a believer in divine creation (see the previous class on Evolution and the Great Chain of Being), classified humans as part of a primate designation (62).

Why did Linnaeus call humans primates?

At this time of European history, again before ideas of evolution became introduced, people were nevertheless able to see the similarities between humans and especially the apes. As Lavenda and Schultz describe later in the chapter, there are a number of shared large primate traits and trends in their evolution (75):

Why do we study non-human primates?

There are two dangers or traps we often fall into when studying non-human primates. The first is anthropomorphism (Lavenda & Schultz:62), or a projection of human qualities onto other animals. But equally important is not to dismiss the study of non-human primates with beliefs that they have nothing to say about human beings.

Lavenda and Schultz spend much of this chapter going through a number of different primate classification schemes and attempting to introduce us to a wide variety of primate life. “Overall, it seems quite clear that flexibility is the hallmark of primate adaptations” (Lavenda & Schultz:72). I’ve written about this diversity and variety in a blog post called So many primates. A big point here is simply to emphasize how diverse and varied the primate populations are: by species, by group, and with individual variation as well. So we need to be careful of attempts to definitively explain human behavior by examples from non-human primates.

Since there are some common stereotypes and misconceptions about primates in the New World (the Americas) and the Old World (Africa and Asia), I wanted to spend some time on how Lavenda and Schultz distinguish these groups. New World anthropoids (66) are also known as platyrrhines, or “flat-nosed,” primates. They evolved separately from Old World anthropoids and are all arboreal or tree-dwelling monkeys. Some of the New World monkeys have prehensile or grasping tails.

Old World anthropoids (67) are also known as catarrhines, or “sharp-nosed,” primates. These include monkeys and hominoids, the category that encompasses apes and humans. Some Old World anthropoids are arboreal; others are terrestrial or ground-dwelling. There are no prehensile tails.

Chimpanzees are considered to be the ape most closely related to humans. Lavenda and Schultz (70-72) describe the chimpanzees as two living species in Africa, the “common chimpanzee” or Pan troglodytes and the bonobos, or Pan paniscus. Bonobos were once described as a “pygmy” chimpanzee, but this designation is incorrect, as they are a separate species and not necessarily smaller than common chimpanzees.

Chimpanzees have been observed to make and use tools like termite sticks. Bonobos are more known for their highly eroticized social interactions and a central role for females.

Both chimpanzees and bonobos are equally related to humans and to the most recent common ancestor of all three species. This is because the chimp-bonobo divergence is estimated to have occurred roughly 2 million years ago, which is more recent than the divergence of the lines which would lead to humans (around 6-10 million years ago). Therefore, whenever anyone wants to compare human behavior to chimpanzees, it is worth asking if bonobos share the same behavior.

It is also important whenever we watch documentaries of non-human primates or read studies to carefully consider the impact of human interaction. Even groups that may not have had direct contact with humans may have seen habitat reduction or other changes due to human proximity.

In recent years, many primatologists have reconceived of their studies as ethnoprimatology (Lavenda & Schultz 72-73). Ethnoprimatology considers the complex interconnections between human and non-human primates. One of the reasons for the rise in ethnoprimatology is the need for studying human and non-human interaction in the “Anthropocene,” which is what many people consider to be the current geological epoch characterized by the extensive impact of humans on local ecosystems (Fuentes in Lavenda & Schultz:73). Ethnoprimatology rejects the idea of humans as separate from the environment or that non-human primates exist outside the sphere of human influence.