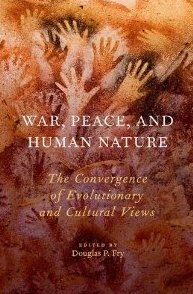 Update 2018: See Dean Falk Is the Clock Ticking Toward Doomsday? in Sapiens (January 2018) for a debunking of the Pinker ideas regarding a decline in violence for state societies. Falk’s post provides an accessible account of his co-authored Current Anthropology article “Annual War Deaths in Small-Scale versus State Societies Scale with Population Size Rather than Violence” with Charles Hildebolt. Although Falk and Hildebolt were not included in the War, Peace, and Human Nature volume, their article would make a great addition and I use it in my Anthropology 2018 and Intro to Anthro 2018 course outlines.

Editor Douglas P. Fry assembles a very interesting cross-section of highly qualified researchers. The table of contents at Oxford University Press reveals the breadth and depth of coverage. When I wrote the review of Diamond, I concentrated mainly on what immediately came to mind from how anthropologists examine the ethnographic record. I was not enough aware of how these issues have become entangled with evolutionary psychology, Steven Pinker, and return to the long-running theme of Human Nature and Anthropology.

Since the turn of the century, there has been a circulation and recycling of stories emphasizing an inner core of human violence and cooperation to wage war. In this story, those core human tendencies are only subdued by modern states and modern moral codes. The classic anthropological lesson of insisting on studying humans as inextricable from history and culture is lost. Moreover, these recycled brutal savage myths circulate at the highest levels of society–Bill Gates is a Jared Diamond & Steven Pinker fanboy. And, as anthropologist Alice Beck Kehoe points out The Remarkable Paradox of Militant Christians (January 2018), the rush to war has been embraced by those who call themselves Christians.

Brian Ferguson, whose work has been so crucial for understanding an anthropology of war and debunking incorrect anthropological data, contributes two crucial chapters to War, Peace, and Human Nature.

In the chapter “Pinker’s List: Exaggerating Prehistoric War Mortality, Ferguson discusses how extrapolations from a graph in Keeley’s (1996) War Before Civilization have become recycled and foundational for many of these works. Ferguson’s review is clear:

By considering the total archaeological record of prehistoric populations of Europe and the Near East up to the Bronze Age, evidence clearly demonstrates that war began sporadically out of warless condition, and can be seen, in varying trajectories in different areas, to develop over time as societies become larger, more sedentary, more complex, more bounded, more hierarchical, and in one critically important region, impacted by an expanding state.

Is [Pinker’s] sample representative of war death rates among prehistoric populations? Hardly. It is a selective compilation of highly unusual cases, grossly distorting war’s antiquity and lethality. The elaborate castle of evolutionary and other theorizing that rises on this sample is built upon sand. Is there an alternative way of assessing the presence of war in prehistory, and of evaluating whether making war is the expectable expression of evolved tendencies to kill? Yes. Is there archaeological evidence indicating war was absent in entire prehistoric regions and for millennia? Yes. The alternative and representative way to assess prehistoric war mortality is demonstrated in chapter 11 [“The Prehistory of War and Peace in Europe and the Near East”], which surveys all Europe and the Near East, considering whole archaeological records, not selected violent cases. When that is done, with careful attention to types and vagaries of evidence, an entirely different story unfolds. War does not go forever backwards in time. It had a beginning. We are not hard-wired for war. We learn it. (2013:126)

Following this debunking chapter, Ferguson proceeds to “The Prehistory of War and Peace in Europe and the Near East,” a thorough review of the archaeological record:

This chapter challenges the repeated refrain of “absence of evidence is not evidence of absence.” War does leave behind recoverable evidence. True, in some cases, war could be present but for some reason not leave traces. However, comparison of many, many cases, from all different regions, shows some clear patterns. In the earliest remains, other than occasional cannibalism, there is no evidence of war, and barely any of interpersonal violence. In Europe’s Mesolithic, war is scattered and episodic, and in the comparable Epipaleolithic of the Near East, it is absent. Neolithic records vary, but all except one begin with at least a half a millennium of peace, then war appears in some places, and over time war becomes the norm. War does not extend forever backwards. It has identifiable beginnings. (2013:191)

My suggestion is that as archaeologists search for signs of war, they also consider the possibility that humans are capable of systematically dealing with conflict in peaceful ways. . . . Across all of Europe and the Near East, war has been known from 3000 BC, or millennia earlier, present during all of written history. No wonder we think of it as “natural.” But the prevalent notion that war is “just human nature” is empirically unsupportable. The same types of evidence that document the antiquity of war refute the idea of war forever backwards. War sprang out of a warless world. Humankind has suffered infinite misery because systems of war conquered our social existence. Better understanding of what makes war, and what makes peace, is an important step toward bringing peace back. (2013:229)

Interestingly, as Paul Heikkila pointed out in Facebook comments, although Jared Diamond does not mention Brian Ferguson in the book version of The World Until Yesterday, Diamond does list Ferguson’s work in the web version of “further reading.” For me, this only complicates the issue. If Diamond has actually read Ferguson, or Ferguson and Whitehead’s War in the Tribal Zone, it certainly has had zero impact on his discussion of non-state peoples as more prone to violence!

Instead, this seems to be an ongoing issue of listing additional readings without apparently considering their arguments, as was discussed by at least two authors in Questioning Collapse: Norman Yoffee says Diamond misinterpreted his book as well as Joseph Tainter’s work, the first two sources cited in the “Further Readings” section of Collapse (Yoffee 2009:177). Drexel Woodson “wonders how discerningly Diamond read the five books on Haiti” (2009:278).

In any case, the War, Peace, and Human Nature volume is a most useful intervention. It is suitable for an Introduction to Anthropology course, and I used it in my 2015 Intro to Anthro. Before wading into these issues around Diamond’s book, I had not realized how much the idea of a warlike human nature had become a near religious dictum. And I must again note the irony that Jared Diamond’s 1987 breakout article Worst Mistake in the History of the Human Race pinned warfare not on non-state societies, but on agriculture: “Forced to choose between limiting population or trying to increase food production, we chose the latter and ended up with starvation, warfare, and tyranny.”


War, Peace and Human Nature successfully debunks the idea that there is an inherently warlike human nature.Click To Tweet