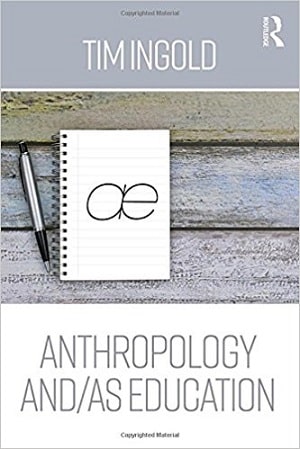 In each generation, the question of “What is Anthropology?” must be answered anew. In 2017, Tim Ingold’s Anthropology and/as Education provided a summation of a discipline that strives to reveal the conditions and potentials of human life:

Anthropology is a generous, open-ended, comparative, and yet critical inquiry into the conditions and potentials of human life in the one world we all inhabit. It is generous because it pays attention, and responds, to what other people do and say. . . . Anthropology is open-ended because its aim is not to arrive at final solutions that would bring social life to a close but rather to reveal the paths along which it can keep on going. We are committed in this sense to sustainable living–to a form of sustainability that that does not render the world sustainable for some through the exclusion of others but rather has a place for everyone and everything. Anthropology is comparative because it acknowledges that no way of being is the only possible one, and that for every way we find, or resolve to take, alternative ways could be taken that would lead in different directions. No path is preordained as the only one that is “natural.” Thus even as we follow a particular way, the question of “why this way rather than that?” is always uppermost in our minds. And anthropology is critical because we cannot be content with things as they are. By general consent, the organisations of production, distribution, governance and knowledge that have dominated the modern era have brought the world to the brink of catastrophe. In finding ways to carry on, we need all the help we can get. But no one–no indigenous group, no specialist science, no doctrine or philosophy–already holds the key to the future, if only we could find it. We have to make that future together, for ourselves. This however can only be achieved through dialogue. Anthropology exists to expand the scope of this dialogue: to make a conversation of human life itself. (58-59)

Anthropology is a generous comparative inquiry into the conditions & potentials of human life (Tim Ingold)Click To Tweet
Now, of course, that is quite a doozy of an attempt at “what is anthropology?”! A shorter version may be found in one of my preferred textbooks for Introduction to Anthropology: “a scholarly discipline that aims to describe in the broadest possible sense what it means to be human” (Anthropology: What Does it Mean to be Human? 2021, 5). And for a 2021 YouTube lecture attempt based on that textbook, see:

What is Anthropology: Generous

Anthropology might be in some ways considered a form of radical listening. That radical listening begins with a generous definition about what human life includes. As part of its study, Biological Anthropology includes non-human primates and human evolution. Biological anthropologists have listened and studied with all primates. Anthropologists have been at the forefront of a generous interpretation of our humanity, including Neandertals & Denisovans as part of the family. Anthropology has debunked ideas about racial separations and superiority. Biological anthropology denounces the effects of racism and those who have fought against the generosity which should characterize how we share our world.

When we use Archaeology to reveal the human past, we find a broad diversity and spectrum of human economic and political arrangements. This record of human life reveals societies which have been much more sustainable than our own societies have proven to be. Although of course societies ebb and flow, the archaeological record reveals dynamic and sustainable forms of life that persist for hundreds or thousands of years.

The comparative work of Cultural Anthropology leads us to insist that no one form of human life is “natural.” There are no bedrock or natural roles for sexes and genders; for parenting; for kinship; for economic systems; for political organization. The social inequalities we observe are not inevitable. We can live differently, whether that means providing healthcare as a human right or curtailing gun violence. Cultural anthropologists have gained these perspectives through this process of radical listening and what we call participant observation. As Ingold describes, participant observation “enshrines an ontological commitment” that is fundamental to the discipline of anthropology (2017:59).


The comparative work of anthropology leads us to insist that no one form of human life is 'natural.'Click To Tweet
Or, as Alpa Shah observes:

Participant observation can be revolutionary praxis for at least two reasons. The first is that through living with and being a part of other people’s lives as fully as possible, participant observation makes us question our fundamental assumptions and preexisting theories about the world; it enables us to discover new ways of thinking about, seeing, and acting in the world. It does so by being inherently democratic not only because of its pedagogy of a two-way process of exchange between educator and educated but also because it ensures that we explore all aspects of the lives of the people we are working with, recognize their interconnections. (2017:47)

What is Anthropology: Critical

Based on anthropology’s generous, open-ended, and comparative observations, we are forced to take a critical (or even revolutionary) stance on many social positions. Participant observation as anthropology “requires, even forces, one to throw away one’s assumptions about the world and seeks to understand social life anew through our engagement with distant others and their social relations” (Shah 2017:56).

Anthropological research reveals that prejudice should not masquerade as science. But the science of anthropology must be taught again and again and again. Anthropology should be a counterpoint to the Western project that has left our world in a precarious state. “We anthropologists have tremendously important things to say, and we need to be there to say them” (Ingold 2017:24).

Here, Ingold’s thoughts on the intersection of anthropology and the university are pertinent:

That said, it is important to realize that academia and the university have also been places of exclusion, hierarchy and intolerance. As linguistic anthropologists Nelson Flores and Jonathan Rosa put it, “the challenge is transforming institutions that have inherited a legacy of systemic racism into spaces that are truly anti-racist. This project of creating anti-racist institutions requires a careful examination of the fundamental logics that privilege or marginalize particular modes of institutional participation and communication” (Political Correctness Is Not the Problem, Systemic Racism Is).

Although the work of anthropology to spur critique is enormously important, part of the mission of anthropology is to inspire what Michel-Rolph Trouillot terms “moral optimism.” Or, in the words of anthropologist Edward Fischer, we need to think about a “positive anthropology”:

Anthropology is more comfortable offering critiques than positive alternatives, but the possibility exists to combine our critical proclivities with non-prescriptive, ethnographically informed positive alternatives that engage public policy debates. If a society’s goal is to have people live meaningful and fulfilled lives–and not just increase income and consumption at all costs–then we should look to ways to help people realise their longer term goals, the moral projects of their lives, affluence (and its converse, poverty) as seen in all of its multiple dimensions. . . .

Perhaps, then, we anthropologists should more fully embrace the constructive possibilities of a positive anthropology. To fully enter into national public discourse, to exert the influence that most of us think we should have, it will be necessary to offer answers as well as critical questions. (‘Economy, Happiness, and the Good Life:’ An Interview with Edward F. Fischer, December 2017)

One of the main goals of Living Anthropologically for 2018 will be to infuse these statements into the framework of introductory anthropology courses, and in so doing make the positive possibilities of anthropology available to wider audiences. For my latest attempts, see the Introduction to Anthropology 2018 outline (with Lavenda & Schultz) and Intro to Anthro 2018 (with Welsch, Vivanco & Fuentes).

Resources for “What is Anthropology?”

My take on anthropology has been very influenced by Tim Ingold, and I use his The Perception of the Environment: Essays on Livelihood, Dwelling and Skill for my course on Cultural Ecology. For this “What is Anthropology?” essay I’ve quoted from Ingold’s contribution to Hau: Journal of Ethnographic Theory, “Anthropology Contra Ethnography.” There are many perspectives and debates within anthropology, and the Debate Collection of Hau contains other essays which take issue with Ingold’s perspective. It seems that Ingold’s essay was a precis for Anthropology and/as Education, and so I quote from the book where possible.

The American Anthropological Association has a useful “What is Anthropology?” page which details the disciplinary subfields.