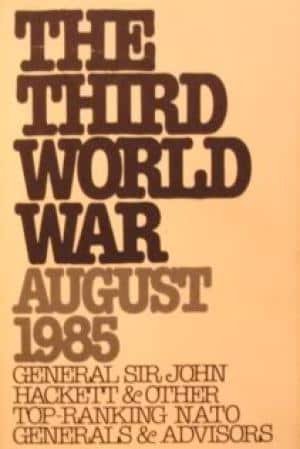 Update 2021: These posts from 2018 on “When will the United States Collapse?” obviously did not come to pass in the moment. But there continue to be warnings, tremors. I still believe these 2018 musings might be valuable:

As of April 2018, I had been working on a draft of this post on “when will the United States collapse” for a month or so. I found it somewhat curious that no one on the Anthropology Blogs seemed to be speculating about such issues. My own inspiration came from a CNBC post in March 2018, The Trump administration is teetering on the edge of a political abyss. And if CNBC was saying it, you know you should pay attention. But first:

I am probably the person you should least trust to answer the question of “When will the United States collapse?” I grew up in 1970s Montana, swimming in the same water as survivalists. I read books like The Third World War: August 1985 and it seemed completely realistic.

After that, I turned to Marxian history and economics. I even got a copy of Althusser’s Reading Capital. Fun times. Marxian-inspired anthropologists are rather infamous for constantly predicting crisis. For example, see Reflections on Moishe Postone’s legacy for anthropology by Hadas Weiss on the Focaal Blog (April 2018). There, Postone’s most-recently cited reference is “Thinking the global crisis.” From 2012.

I started thinking much more anthropologically under the guidance of Michel-Rolph Trouillot. And Trouillot was very clear that the value of anthropology was not from prediction. Nevertheless, anthropologists often veer between moral optimism and intellectual pessimism, which is another reason I was surprised to not be hearing more anthropological chatter on the theme.

When will the United States collapse?

If in March 2018, The Trump administration *was* teetering on the edge of a political abyss, what now? That was before John Bolton. The rise of Peter Navarro. Developments in Trump-Russia. Plus various legal troubles, and apparently firing people faster than they can be appointed.

It seems we would hear something about such matters on anthropology blogs, but… crickets.

For the most part, I have mostly assumed that the question of “When will the United States collapse?” would not occur as a distinct event. It is a slow process, one that we are already living through. Only in historical retrospective are we able to identify the processes and signal the key events along the way.

However, as of 2018 I began wondering if this all may go down more as a series of swift events. So I took a break from writing an Introduction to Anthropology syllabus in order to write three follow-up posts of how this might play out:

And then a final post on “What should you do?”