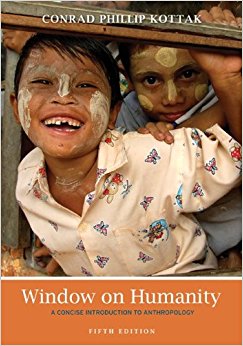 Window on Humanity was the condensed version of Kottak’s Anthropology: Appreciating Human Diversity. However, Kottak textbooks have always been expensive, and in 2018 I can’t find a copy for less than $18. And at that price you don’t even get color photographs. I would claim it’s a better deal to get a used copy of the Lavenda and Schultz textbook and then use my Anthropology 2017 course outline.

Kottak has always been rather culture-heavy, and Window on Humanity sets the tone with its second chapter devoted to culture. But in some ways the four-field Kottak line seems to have become an afterthought to the Gezon and Kottak magazine-style CULTURE (see Doubling-Down on Culture in Anthropology).

Corresponds to Chapter 1, “What is Anthropology?” which begins with a helpful dismissal of offhand phrases like “That’s just human nature” and “People are pretty much the same all over the world” (1). Kottak writes “culture is not itself biological, but it rests on certain features of human biology” (2). He then talks of the “biocultural” and how “cultural forces constantly mold human biology” (5), using a nice example from swimming and sport. Previous editions of Window on Humanity included a section on race in this first chapter, but for the 5th Edition Kottak moves that into chapter 4. While this may be a gain for clarity and flow, it loses the possible race-culture counterpoint potential.

, a move some anthropologists would find questionable (27; see Darwin in Mind–The End of Evolutionary Psychology for Anthropology). Kottak also approves of Geertz’s idea of culture as “control mechanisms–plans, recipes, rules, instructions, what computer engineers call programs for the governing of behavior” (18).

Kottak’s account of evolution is straightforward and does not include larger theoretical issues and debates. Window on Humanity does not discuss more recent evolutionary ideas like niche construction.

One of the updates touted in Window on Humanity is the inclusion of 2010 census figures, such as those for income inequality (396). However, the income inequality statistics are nowhere near the 22x average white/black wealth gap in the U.S., which goes unmentioned (see Social Construction of Race = Conservative Goldmine. Window on Humanity includes the classic Kottak assertion: “It probably is better to use the term ethnic group rather than race to describe any such social group, for example, African Americans, Asian Americans, Anglo Americans, Hispanics, Latinos, Latinas, and even non-Hispanic whites” (397). Looking at the list, it seems this assertion has been pushed to the edge of absurdity!

Brief but acceptable discussion of the Boas immigrant study (83-84). No references to contemporary craniometrics.

Window on Humanity does not mention a race revival, and is one of the only current textbooks to not mention The Bell Curve. No mention of race revivals like A Family Tree in Every Gene (Leroi 2005) or race-based medicine. Very brief box on “Oprah’s DNA” related to genetic ancestry testing (84).

Chapter 4, “Evolution, Genetics, and Human Variation” is chapter with race debunking, beginning with the headline “Race: A Discredited Concept in Biology” (80). Kottak first discusses “races are not biologically distinct” (82); second “genetic markers don’t correlate with phenotype” (83); and third “explaining skin color” (84) before going into human biological adaptation (88). The debunking is done mostly on the basis of clines and includes a reference to Cann et al. 1987 to emphasize genetic similarity and an Out of Africa perspective (83).

Although Kottak does use biocultural to refer to how culture constantly shapes biology, he does not make the connection of how race as a cultural category could become biology. Window on Humanity does not discuss IQ and race.

Chapter 5, “The Primates” is an overview. Discusses differences between bonobo and chimpanzee behavior, but does not make it clear that they could equally be considered as model of most recent common ancestor. Very little mention of stereotypes about non-human primate dominance or aggression. No discussion of human influence in the Jane Goodall studies.

Discusses bipedalism in chpater 6 on “Early Hominins.” No reference to bipedalism as learned behavior or as styles of walking.

Window on Humanity does not emphasize a tool-use coevolution.

Kottak was such a heavy proponent of Out of Africa II in the 14th edition of Appreciating Human Diversity that multiregionalism had completely disappeared from his discussion and I wondered what he would do for the 15th edition. The 5th edition of Window on Humanity reveals a disjointed approach. Kottak retains a focus on Out of Africa II, and still talks about Wolpoff as one of “those scientists who still believe that Neandertals could have contributed to the ancestry of modern Europeans” (159). However, Window on Humanity now includes a section on “The Denisovans,” in which Kottak mentions the finding that “suggests that Neandertals interbred with AMHs soon after the latter emerged from Africa around 50,000 years ago” (162).

As mentioned above, Window on Humanity has not used the Neandertal and Denisovan data to revise allegiance to Out of Africa II. Multiregionalism continues to go unmentioned, with a highlight for “Out of Africa II” (159) and “Genetic Evidence for Out of Africa II” (161). Kottak uses neutral terms for human migration from Africa (contrast with Nicholas Wade’s biased language of “escape” from Africa). Kottak asks “were the Neandertals outcompeted by modern humans or killed off by them?” (211) and then leaves this as a hanging question for future discoveries.

In general, Kottak seems to support a biocultural naturenurtural view, but in other places approves of universals (see section 1.1).